England were knocked out of the European Championships by Denmark in the deciding game of the deciding match of their quarter-final. 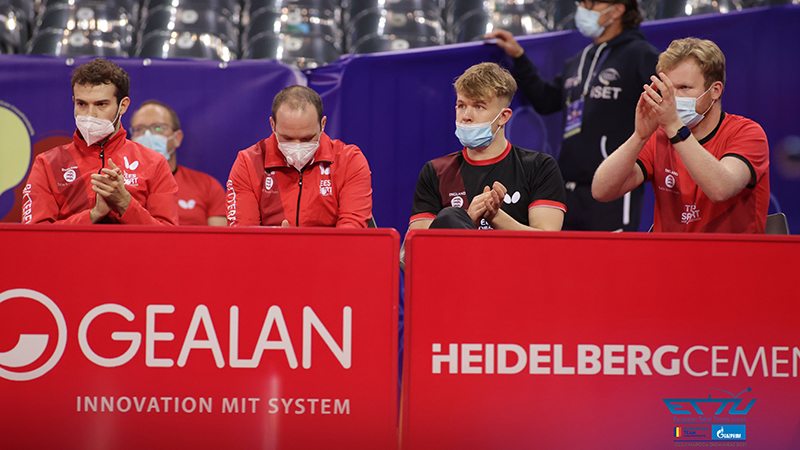 England were knocked out of the European Championships by Denmark in the deciding game of the deciding match of their quarter-final.

Paul Drinkhall was beaten by Anders Lind in that decisive ‘shootout’ as Denmark’s battery of three left-handers followed up their impressive form from the group stage, during which they had eliminated Portugal.

England will reflect on a missed opportunity – certainly, having taken two matches off the Danes’ highest-ranked player, Jonathan Groth, they might have expected to advance to the last four themselves.

It started so well for England as Drinkhall overcame Groth 3-2 in a proverbial see-saw match. The opening games saw each player trade runs of points – Drinkhall led 6-1 in the first on his way to winning it 11-5 but Groth then turned an 8-4 deficit in an 11-8 win in game 2. Drinkhall went back in front 11-7 in the third but Groth again levelled.

The decider saw Drinkhall trail 8-5 but he turned that – either side of a Groth timeout – into a 10-8 lead and took the second of those match points.

Liam Pitchford was up against world No 83 Anders Lind, who would have been on a confidence high after defeating Portugal’s world No 24 Marcos Freitas in the groups.

He added an even more notable scalp in the shape of world No 14 Pitchford in another to-and-fro affair in which Pitchford led 1-0, trailed 2-1 and levelled at 2-2.

Lind won the first three points of the decider, prompting Pitchford’s timeout, but although it was close all the way the Englishman was never able to get close enough and Lind took it 11-9 to level the tie.

Sam Walker’s opponent was well known to him – he and Tobias Rasmussen had as a double-act reached the European quarter-finals in 2018.

It also went the distance, Rasmussen (WR 208) taking the first but then having to come back from 2-1 down put the Danes in front, winning three points in a row from 8-8 in the deciding fifth.

None of the first three matches had gone according to rankings, and Pitchford would have to change that by beating Groth to keep England in the championships.

He did just that and compared with what had gone before it was a relative canter as Pitchford won in three straight against a player who is a good friend off the table.

And so to that decider. Drinkhall took the first 11-7 – along the way, somehow earning a yellow card for slowly side-footing the ball a distance of about 5ft.

The yellow was out again at the start of the second game, alongside a red, as Lind was docked a point for being late back to the table – having earned a yellow earlier in the tie. It served to ignited the Dane and he took the game 11-8.

Drinkhall was back in front in the third, including seeing a Lind point overturned after Drinkhall spotted a touch of ball to face on Lind’s serve.

Once again, Lind fought back, a 4-0 lead in the fourth setting him on the way to levelling 11-5.

And so it came down to a one-game shootout for a place in the semi-finals. Could Drinkhall make similar experiences tell or could Denmark continue a run which had already seen them eliminate Portugal?

It was 5-4 to Drinkhall at the change of ends but the key move came at 6-6 as Lind took the next three points. He soon brought up three match points with the aid of a net-cord and sealed the victory at the first attempt as Paul was unable to lift a firm forehand back over the net.