In this edition, we focus on a Chinese training camp attended by some of our bright young male players. 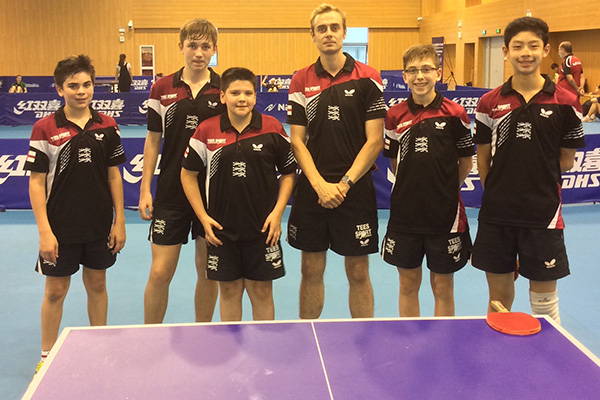 In this edition, we focus on a Chinese training camp attended by some of our bright young male players.

Five talented youngsters stepped up their learning curves during a three-week training camp in China.

Based at the China Table Tennis College, the players benefitted from six-hour training days with partners from China and other visiting countries, on some of the 120 tables at the college.

They also spent time in the Chinese language classrooms and taking part in cultural visits and activities.

Chris said: “From a table tennis perspective, it was great having the table time and training with Chinese sparring partners.

“But for a young person it was also inspiring to get an insight into Chinese training and culture.”

Chris said the culture at the college was highly competitive but that the training methods and playing standards were not hugely different from English regimes.

“They Chinese players in our group were a bit better but I don’t think they were loads better,” he said, “although the 40-plus under-15s (and many U13 and U11) training 35-40 hours per week looked very promising.

“They have a lot more table time but I think for the table time we can offer, we do a good job, we just need to do more.

“It was kind of an eye-opener to see they don’t do things very differently. There are no secrets – it’s just more hours and hitting more balls and fierce competition to reach the next stage of the pathway.

“I’ve learned a lot. I was good seeing some of the under-15 sessions and getting some ideas on how to create a competitive environment.”

Ethan said he had gained a lot from the experience. He said: “They are more determined and more intense in their training.

“The coach would set a straightforward exercise which we would work on in pairs. We had quite a lot more table time than usual.

“I think I have improved the power in my forehand, both speed and spin. Also I think I am moving around the table more quickly.”