England have their first medal of the Commonwealth Games after sinking hosts Australia 3-1 in a brilliant, mesmerising clash to take bronze in the women’s team. 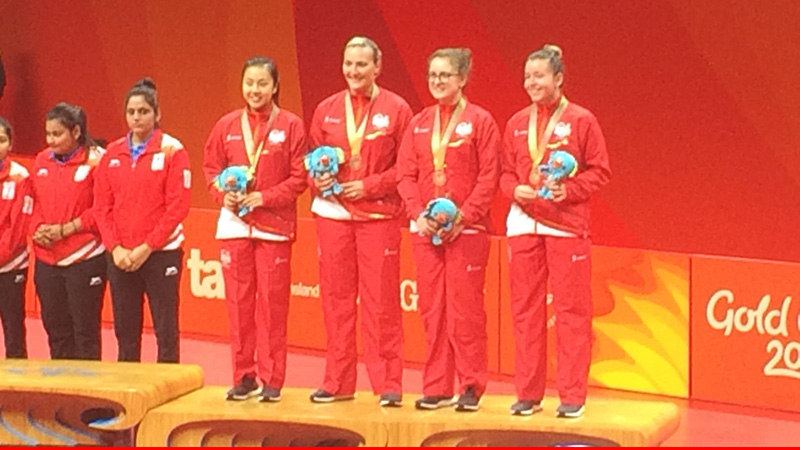 England have their first medal of the Commonwealth Games after sinking hosts Australia 3-1 in a brilliant, mesmerising clash to take bronze in the Women’s Team event.

Tin-Tin Ho won two five-setters and Kelly Sibley & Maria Tsaptsinos the doubles as England made up for the disappointments of previous games to get on the podium – and let’s not forget the vital supporting role played by the fourth squad member, 16-year-old Denise Payet.

It was an emotional rollercoaster for team and spectators in a match that lasted more than three hours and even delayed the gold medal tie. That match was won by India, who had beaten England in the semi-finals and surprisingly went on to beat Singapore 3-1 for the gold.

The ability of England to quieten the crowd was always going to play an important part and Ho did that straight away by taking the first 11-4 against Melissa Tapper.

The left-hander gave the spectators more to shout about in the second, which she took for the loss of eight points.

But Ho’s response was breathtaking as she swept into a 9-0 lead in the third, getting energy from the enthusiasm of her team-mates on the bench.

When Tapper did eventually get a point, the crowd response was somewhat lacklustre, as it was when Ho took that game 11-3 – not that those supporting England minded one bit.

Again it swung as Tapper went into a 5-1 lead in the next, going on to take it 11-7 to make it a one-game shootout to get the first rubber on the board.

Ho swung the momentum back her way with the first four points, culminating in a ferocious inside-out forehand winner. At 6-1, an Australian timeout was the last throw of the dice, and two Australian points later, England called their own timeout to try to nip any comeback in the bud.

It became 6-5, but Ho took four of the next five to bring up four match points. Still Tapper would not go away, winning her two serves, but Ho slapped away a forehand winner to put England’s first point on the board.

Kelly Sibley started in pumped-up fashion against the experience world No 65 Jian Fang Lay, who has won several Commonwealth medals over the years, heavy topspin forcing errors from the Australian.

To say the second game was more tense is rather understating the drama. The final score was 21-19 to Lay, with both players missing multiple game points – or seeing them saved with bold play.

Sibley had the first, then saved three, missed two of her own and saved another two. At 17-17, Lay sent a fast serve long, peeling away in frustration, but again Sibley could not take the chance – and she missed another at 19-18. A cruel edge gave Lay the next game point, which she finally took.

In the context of both this match and the destination of the medal, we were about to find out the psychological importance of that game – and Sibley’s initial response was A1 as she took the third 11-5 with a run of six points.

She led the next 4-1, but the Australian timeout revitalised Lay and she roared through to win it 11-7, and we were again in a decider. Lay proved the stronger in the end and an 11-7 scoreline meant we were at 1-1 – that second match having lasted 48 minutes.

Even by her high standards, Maria Tsaptsinos had been noticeably vocal from the bench in the opening two matches. Now she could play hr part on court, coming in to partner Sibley in the doubles. Once again, Lay was at the other end of the table, joined by player-coach Miao Miao – would the lack of warm-up due to bench duties prove significant for her?

Someone at the BBC noticed @MariaTsaptsinos can get a bit lively – though we thought she was low-key today by her standards 😂https://t.co/Qb7ww7RJtq

England put down a marker in the first game, racing through it 11-2, but the Australians hit back 11-9, stealing a game the English led as Miao began to find her range. The third was a mirror image as Australia led 8-4 but England stole it 11-9.

The English pair kept up their energy levels and always had the edge in the fourth, though Australia produced a few palpitations when they closed from 4-8 to 7-8 – but England won the next three points to go 2-1 up.

It meant Ho could seal it when she took on Miao Miao and she put the first game on the board 11-7, coming from 7-4 down.

Miao won the second 11-9 and yet again we had a match on our hands – the gold medal match between Singapore and India already delayed by the ‘Ashes’ clash.

More drama at 9-8 to Miao in the third as, having already received a yellow card, she was penalised a point for slow play. With Miao’s tears flowing, Lay called a timeout from the bench to allow her colleague to compose herself – the crowd doing their best to lift her too. Her frustration was poured into her blistering return on the next point to bring up a game point, which Ho saved.

The English teenager also had to hold things together through this situation, of course, and the tension ramped up as Ho saw two game points slip by. She got herself back ahead at 13-12, at which point Gustafson deployed his timeout. The result? A long serve which Miao could not get back on the table, and England were a game from bronze.

Fast-forward to 10-9 up in the fourth and it was a point from bronze. Miao saved that with an emphatic forehand winner, netted on her own first game point but then took her second when Ho went long via the top of the net. Another decider – well, winning a medal isn’t meant to be easy, is it?

Having said that, as it turned out, the decisive moments were not as taxing as they might have been. Having laid the groundwork by building 5-2 and 9-3 leads, Ho saw Miao whittle it back to 9-6 before she brought up four more match points. A let, followed by a serve into the net, was a low-key ending that the match did not deserve – not that the England players would have cared as they rushed on to court.

Sibley, winning her first team medal at her fourth Commonwealths, summed it all up:

We just believed in ourselves and were playing really, really well. It was a bit tense at times, Australia are a really good team but I thought we all dug in and kept our heads when we needed to and showed what we can do as a team.

We were really good as a team, good team spirit and that’s what won it for us. I’m so proud of all the girls. It’s fantastic to come away with a team medal.

This medal is for the family to say thanks so much for always being there.

It’s my fourth Games and the first time I’ve won a medal in team. I’ve finished fourth a couple of times which is the worst place to finish but I’ve kind of used that emotion a little bit going into this bronze medal match.

At times it was very nerve-wracking. It’s a lot easier playing that watching, especially Tin-Tin at the end – my stomach was in knots. She did so fantastic to keep her nerve.

On the end of her match against Miao, Ho said:

The set before that was really close and when I lost that I told myself it could have gone either way. I just had to forget about it. I’ve been in that situation before when I’ve been up and lost so I’m really glad this time I’ve learned from that.

Words can’t describe how happy I am. I’m so happy for all the girls, Kelly never got a team medal.