England sweep up the golds

England swept the board at the Butterfly Schools’ Invitation International Championships, winning all six of the team event golds and a host of minor medals too. 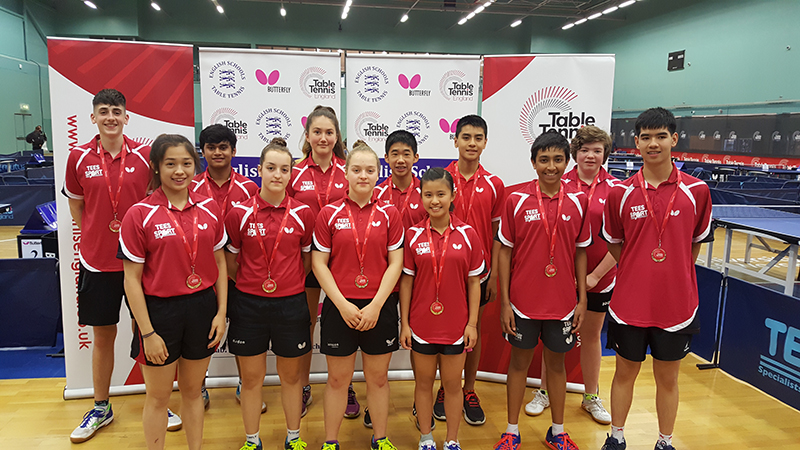 England swept the board at the Butterfly Schools’ Invitation International Championships, winning all six of the team event golds and a host of minor medals too.

Four of the finals were all-England affairs, with only Scotland A in the Intermediate Boys and Ireland in the Senior Girls breaking the spell.

And Scotland A came oh-so-close to ending the England monopoly as Danny Bajwa was defeated 16-14 by England’s Amirul Hussain in the deciding set of the deciding match of the Intermediate Boys’ final.

Open the menus below to see group and knockout results in all the age groups.

Bennett & Aravind won the doubles in three, but Wilson and Bennett then played out an epic attacker-versus-defender encounter, with Bennett pulling out all his determination, power and tactical nous to get through Wilson 3-2 (10-12, 11-9, 14-12, 7-11, 11-6).

Afterwards, Bennett said: “It was unbelievably tough. I’ve never had to work so hard to win a match, every single point had to be 100 per cent.”

Max Stevens and Israel Awolaja ensured a clean sweep of the medals for England by defeating Scotland A 3-1 in the play-off.

And a special mention should go to Ireland B, who beat their A-team to fifth place in a lengthy match which was by a distance the last to finish. For the record, Joey Nelson and Dylan Grace took it 3-2 against the Earley twins, Zak and Thomas – Nelson beating Thomas Earley 13-11 in the deciding set of the final rubber.

It was comfortable though not easy for England A against Scotland A in the semis, a 3-0 win all accomplished in three straight.

The all-England clash between the B and C teams went the distance, however, and England B needed to come from 2-0 down after Max Stevens had beaten Cope in five and Israel Awolaja overcame Wilson 3-0 in the battle of the choppers. Cope & Wilson won the doubles in four and the reverse singles were both won in three – Cope versus Awolaja and Wilson against Stevens.

Otherwise, it was plain sailing for England A, who did not drop another match and finished ahead of their countrymen – who ensure second in the group by beating Ireland A 4-1.

The other lost match for England B was the doubles against Scotland A, a tie in which Wilson went through the pain barrier after a heavy fall against Keir Morton caused a twisted ankle. It was not as bad as it first appeared and he bounced back to win that match 3-1, putting England 2-0 up.

England recovered from going 1-0 to Ireland in the final when Thuy Linh Cashman defeated Naomi Lau 3-1.

Wales rounded off the podium places as Beth Richards and Jamie-Lee Harley defeated England B’s Amy Blagbrough and Rachael Scott 3-0, though the first two singles matches both went the distance.

Ianau and Lau beat their compatriots Rachael Scott and Amy Blagbrough 3-0 in the semi-finals, while Ireland’s tie against Wales went the distance – all the way to 12-10 in the deciding set of the deciding ruber.

It was Wawrzyniak who held her nerve against Jamie-Lee Harley to complete the Irish victory, after Beth Richards’ two singles wins for Wales cancelled out Thuy Linh Cashman’s win over Harley and a five-set Irish doubles triumph.

Wales topped the first group without either Richards or Harley tasting defeat, including an emphatic 5-0 against England’s Blagbrough and Scott.

In the other group, England A finished ahead of Ireland, having beaten them 3-2 on Friday, with both countries winning their other matches 5-0.

Amirul Hussain broke Scotland hearts as he beat Danny Bajwa 16-14 in the final set of the match to keep England on course for a clean sweep.

Both boys had match points – starting with Bajwa at 10-8 up – and both were urged on by some magnificent support.

Neither deserved to lose but in the end left-hander Bajwa put a receive just off the table and it was England’s gold, with Hussain reflecting: “I didn’t think about getting nervous, I just thought about staying positive and still attacking.”

It had been a see-saw match as Hussain put England ahead in three against Dylan Curry, before Scotland led 2-1 after Bajwa beat Naphat Boonyaprapa and joined Curry in taking the doubles.

England beat Scotland to bronze too, Thomas Rayner and Sam Chesterman seeing off their B counterparts Martin Johnson and Zaid Khalid 3-0, though Chesterman needed five against Khalid and the doubles also went to a fifth.

England A topped their group with ease, dropping only one match – the doubles during their 4-1 win over Wales, 16-14 in the deciding fifth set.

England B missed out on top spot in the other group as Chesterman and Rayner were blown away 5-0 by Scotland A. They did, however, claim second place thanks to a 3-2 margin over Jersey A, for whom Luc Miller won his two singles.

England A prevailed against the B team, but only just as Patricia Ianau and Katie Holt overcame Gemma Kerr and Alice Dillon 3-2.

The third-place match saw Ireland (Lucy Craig and Mia O’Rahilly Egan) 3-0 winners over Scotland A, every match decided in four.

Both semi-finals finished in four matches, with England losing the doubles on each occasion, Kerr & Dillon to Scotland A and Ianau & Holt to Ireland.

The England A pair completed a group-topping performance with a 5-0 against Wales today, finishing ahead of Scotland A in the standings.

The As beat the Bs in another all-England clash, recovering from Ben Hee losing the first match in four to Ryan Choong.

Naphong Boonyaprapa levelled in three against Ben Piggott and then joined Hee to win the doubles in four. Hee’s 3-0 (6, 8, 8) victory over Piggott sealed the gold.

Both England teams topped their groups – the A team dropping only one match when Hee lost the opener to Evans of Wales, who finished second in the group.

England B completed an unblemished record of 5-0 wins to finish ahead of Ireland.

England A just about held off England B in the final, seeing their team-mates close from 2-0 down to 2-2 before Mari Baldwin defeated Erin Green in the decider.

Baldwin said: “After we lost the doubles I was a bit annoyed, but we didn’t let it stop us and we got there in the end. There was pressure, because they are my friends, but I played the ball and not the player.”

It was 5-0s all round for the two England teams in the groups today. The A-string completed an unblemished record against Scotland B to finish ahead of Ireland, while Sao Pedro and Green added to Friday’s crucial 3-2 win over group runners-up Wales by overcoming Scotland A and Guernsey today without dropping a set, let alone a match.