England stunned by Nigeria in semi

England’s gold medal dream was shattered by Nigeria in a dramatic semi-final at the Commonwealth Games today. 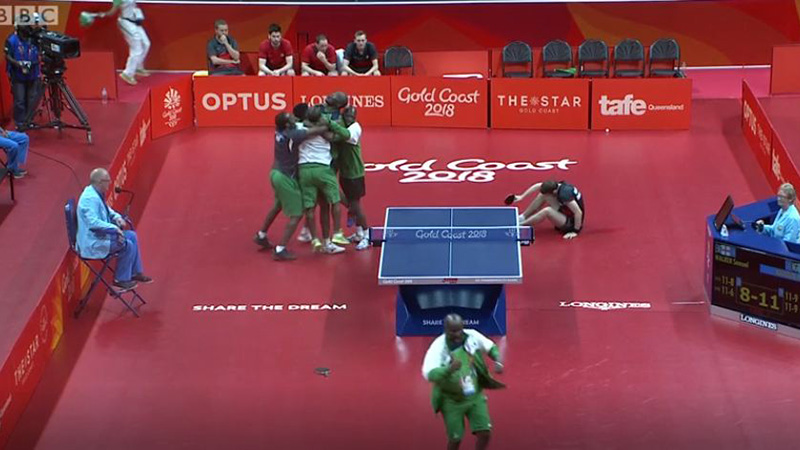 England’s gold medal dream was shattered by Nigeria in a dramatic semi-final at the Commonwealth Games today.

The Africans won 3-2, with every singles match going to a deciding set and Bode Abiodun’s victories over Liam Pitchford and Sam Walker proving critical.

England must now pick themselves up to face Singapore in under an hour’s time for the bronze, while Nigeria take on India for the gold – India having won the other semi-final 3-2 earlier.

Listen to Paul Drinkhall’s reaction to the defeat:

There was no Quadri Aruna in the Nigerian line-up, the highest-ranked player in the tournament at world No 26 having flown into Australia in the last few hours after completing club commitments in Europe. Instead, Segun Toriola led off the Africans’ effort and was up first against Paul Drinkhall.

Toriola, a seven-time Olympian and multiple Commonwealth Games medallist, is still dynamic and athletic at 43 and the first game saw both players demonstrating their full range of movement and attacking power.

It was first blood to Nigeria as Toriola saved three game points before taking his own first chance at 13-12, and he opened up a 5-1 lead in the second. Drinkhall closed to 6-5, prompting an early Nigeria timeout, during which Aruna led discussions on the bench. Both players continued to show lightning reflexes to pounce on anything loose but it was Drinkhall who brought up the first game point and this time he took it to level at 1-1.

Drinkhall kept up a good variety of serve and targeted the backhand of Toriola when he could, and that saw him keep his nose in front in the next, which he took to seven.

It was similar in the fourth as Drinkhall got to 10-8 up, only to see his two match points saved with the aid of two net cords which took the ball out of reach. A third match point followed, saved by a ferocious inside-out forehand receive, and Toriola made it count by taking his first game point to ensure a decider.

There was no psychological hangover from that and Drinkhall again was just ahead for most of the decider. And having brought up three match points, there was no bad luck or opposing excellence this time as Drinkhall pummelled a forehand down the line.

Liam Pitchford beat Bode Abiodun 4-0 at the last Commonwealth Games in Glasgow, on his way to a singles bronze medal. They met again here and Pitchford continued that unblemished record as he took the first two sets.

It was a ‘bitty’ match that lacked fluidity, glimpses of brilliance interspersed with mistakes by both players – including two service errors by Abiodun in the first.

The theme continued in the third, Pitchford’s game not firing as the Nigerian varied his play and cut the deficit with an 11-4 scoreline, and in the fourth when Abiodun fought back to level it 13-11 on his third game point.

There had been enough quality from Pitchford to suggest he could turn back the tide, but when he lost four in a row to go 4-2 down in the decider, a timeout was called. Abiodun, currently ranked at 296, continued to apply pressure and took the next four points as well to put Pitchford really up against it. Pitchford briefly rallied to 8-4; Aruna, who had been bouncing up and down on the bench as cheerleader, called a timeout. It had the desired effect as Abiodun closed it out 11-5.

Toriola was back on for the doubles alongside Olajide Omotayo, with Drinkhall and Walker out for England, as they have been in every team match to date.

The English pair were quickly in the groove and raced through the first 11-2 – but the momentum swung abruptly to Nigeria as they led 8-2 and 10-4 in the second. It was enough of a cushion, though England saved three game points.

Nigeria, urged on by a vociferous bench, continued the turnaround, leading 9-4 in the next. And though England closed to 9-9 and then saved two game points, Nigeria moved ahead and went on to claim the fourth and move ahead in the tie.

Based on the rankings, England were favourites for the two remaining singles matches, but were Nigeria in the ascendancy? Certainly, Omotayo was assertive and bristling with positive body language and fed off great energy from his bench as he took the first 11-9 against Pitchford.

The Englishman had not looked settled to this point, but a switch seemed to flick in the second game and he found some much-needed consistency to level the match at 11-4. Pitchford was finding a way to put pressure back on his opponent and that continued in the next, which the Englishman took 11-8 – but inconsistency returned in the fourth and Omotayo levelled.

At 5-5, the decider was anyone’s but when it really mattered, Pitchford delivered. He reeled off six points in a row with his best table tennis of the match, and England could breathe again for now.

Walker had not been needed in singles so far in Australia, but he has been through his share of big, decisive matches in the past – notably in Rio – so there were no fears on that score.

He started with a composed and positive set to strike first, but four points by Abiodun from 9-7 down in the second levelled it up.

He took that run of points to seven to move into a 3-0 lead in the third, but Walker closed up the gap and they went point for point to 9-9. It was Walker who blinked first, and England were looking down the barrel as Nigeria were one set from the final.

Of course, it was destined to go to a decider as Walker built a 6-1 lead, helped by a thin edge and a service fault against Abiodun, who had previously been warned. He went on to take it 11-6.

Who would lift it? It was Abiodun, who roared out to a 7-0 lead. Walker edged back to 7-4 . . . Abiodun edged out to 9-4. Twice, Walker was interrupted by crowd noise before his serve, but he bravely came back to 9-8 either side of a Nigeria timeout. With nerves frayed everywhere, a backhand found its way through Walker’s defences, and it was to be bronze at best for England.