Sam Walker is into the semi-finals of the men’s singles, while Liam Pitchford & Paul Drinkhall will go for gold in the men’s doubles final and there is an all-England clash in the men’s para gold medal match. 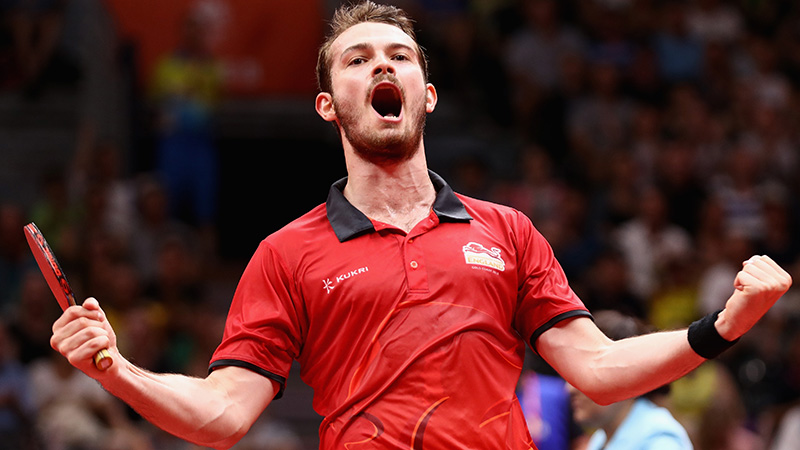 Sam Walker beat world No 46 Sathiyan Gnanasekaran to move into the men’s singles semi-finals at the Commonwealth Games today, while Liam Pitchford & Paul Drinkhall made it through into the men’s doubles final and Kim Daybell and Ross Wilson will meet in the men’s para final.

Walker set down an early marker against his Indian opponent by marching out to a 7-1 lead in the first, and he was never behind as he went on to take a 4-0 victory.

Here is what Sam had to say after his match:

However, Liam Pitchford will not repeat his singles medal heroics from Glasgow 2014 after losing a tight match to India’s Sharath Kamal Achanta.

It was close throughout the quarter-final against the world No 48, with only one of the six games having more than two points between the athletes.

But Pitchford will have the chance to go for gold in the men’s doubles as he and Drinkhall came through two matches today.

Earlier, Pitchford & Drinkhall dug deep to withstand a Singapore comeback and book their place in the semi-finals.

The English pair started positively against Gao Ning & Pang Xue Jie and were always in front in the first game, and some superb Pitchford winners saw them save game points to double their lead in the second.

The third saw a response from Singapore as they went 7-2 up and eked it out to 10-7, but Pitchford was again to the fore as England took four points in a row to bring up a match point. They had two more, but couldn’t get over the line as Singapore – Gao defending the title he won with Li Hu in Glasgow – fought hard to take the game 16-14.

They led 7-2 again in the fourth but this time made it count 11-5 to take it into a decider. England held the edge for most of the game and a timeout after they saw an 8-5 lead pegged back to 8-7 did the trick as, helped by a brilliant running forehand by Drinkhall at 9-8, this time they took their match point to go into the semis.

Walker & McBeath could not join them, however, as they lost in three close games to Achanta & Gnanasekaran.

The gold medal match in the men’s para TT6-10 singles will be an all-England affair between Ross Wilson and Kim Daybell.

Wilson was pushed hard by Welsh teenager Josh Stacey, who took the first game 12-10 on his third game point. The second saw Wilson respond with a cracking game, which he took 11-2, but the rest of the match was much closer.

Wilson saved three game points in the third with some imposing play, including a brave long topspin serve, before taking his own first chance. And he completed victory to nine in the fourth.

Wilson said: “I had to counter his really strong start and I changed my tactics so I felt like I addressed that and was more positive in the second set and I thought I followed up on my serves better. He was following it up well, and he’s a good player so it’s really pleasing to be in to the final.

“It’s going to be brilliant (to play against Kim), it will be a different match, but great for it to be an all-England final. I think my approach will be the same as any other match and you always want to win. It’s fantastic for England but we both want the Gold medal. I’m just over the moon to be in a final of a Commonwealth Games.”

Daybell’s clash with South Africa’s Theo Cogill was also close as his opponent twice levelled the match to take it to a deciding fifth, which Daybell always controlled to set up a final clash with his colleague tomorrow at 5.05am UK time.

Daybell said: “I think I had been struggling to find my form at this tournament and I don’t know whether it’s the surroundings or the occasion because I have had a few up and down moments so far, but I’ve just about how enough to get through each one and that’s the most important thing.

“I think when I tried to impose my game more I became more comfortable and I guess that comes with the pressure of the situation. I managed to get a bit more pace and spin in my game and it helped me control it a bit more.”

Pitchford & Tin-Tin Ho are determined to go one better than their Glasgow silver, and they twice fought back from a set down to India’s Shetty & Madhurika Patkar to book their place in the last four. Ho & Pitchford will face India’s Gnanasekaran & Manika Batra at 1.05am UK time tomorrow.

In their quarter-final, Sam Walker & Denise Payet were well beaten by Gao Ning & Yu Mengyu , with Gao imposing himself on proceedings and finishing it off with an emphatic forehand winner as the Singapore pair took it 4, 5, 5.

Felicity Pickard was always going to be up against it in the women’s para TT6-10 singles, the Class 6 athlete facing Class 10 opponent Faith Obazuaye of Nigeria.

She acquitted herself well and generated plenty of power, but her opponent had that extra mobility to be able to stay in front all the way. Pickard still has a chance to go for bronze, against another Class 10 athlete, Andrea McDonnell of Australia, tomorrow.