The latest on how lockdown 2.0 has affected out England training camps and how we are engaging with players, coaches and parents to help our young pathway players to maximise the work they can do at home. 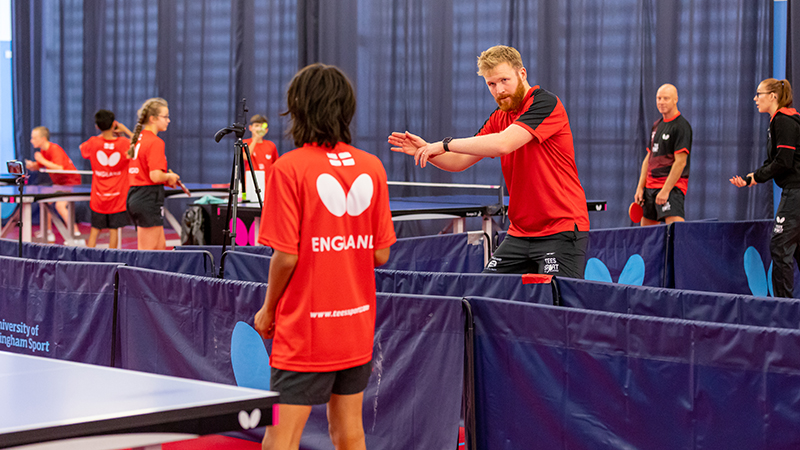 Despite the training camps not now taking place, the young players in the pathway (Hopes, Aspire and Junior squads) are still going to be working hard as they all progress through lockdown 2.0. A weekly group physical training session will take place every Wednesday via Zoom, with the first session being led by England ace and Rio 2016 Olympian Sam Walker.

Alongside this, the performance team are arranging a series of one-to-one sessions with each player to discuss their progress to date, key areas of improvement to focus on and to begin the planning process once training and competition is able to resume. There will be group sessions covering a variety of topics, such as video analysis and mentality for performance as well as a table tennis quiz.

A group session with players’ coaches is being planned for the end of November to update everyone on the work that has been covered by the players over the last 18 months and the key focus areas for each individual player in the short term.

The global situation has prevented the running of assessment camps for the training squads as originally intended, as well as delivery of the training programmes. The Hopes and Aspire assessment was re-scheduled for December 12-13 and it is hoped that this will still be able to take place as planned, with new groups selected before Christmas and the first camps taking place in January.

Matt Stanforth, Programme Manager, said: “It’s obviously a real shame that national training has again had to stop, but the players and staff have all taken this in their stride and are approaching this from a positive angle.

“The quality of work the players were able to do before, despite the restrictions (in the first lockdown), was really incredible and we hope that we can all draw on this experience to get the most we can from the next few weeks.”

Over the last two months prior to lockdown, the England Junior Squad have been running a number of training camps and internal competitions. Each camp has also invited additional players into them as part of its assessment process, with the final assessment of players also due to take place on December 12-13.

The lack of international competition has been a significant challenge for everyone and has prevented the opportunity for players to demonstrate their playing level and ability on the international stage.

Taking into consideration the lack of competition, the EJS will become an England Junior Training Group during this interim period between now and when competition resumes, with players selected on a camp by camp basis by the performance team.

Players will be selected based on the coaches’ observations to date, the commitment, work-rate and attitude on camp and the work the players can clearly demonstrate has been done whilst in their local training environments. This rolling programme will continue until such time that international competition has resumed and continued for a period of six months, after which when a new England Junior Squad will be selected. The intention is that the initial camp will be made up of a larger group of players who have been identified. All players in this group will be eligible to apply for the Backing the Best and Sportsaid award places that we have available, with award nominations being submitted once the initial group have been notified.

On the EJS, Matt said: “The performance team continually review what we do and at what we need to develop. The current situation means we have to adapt the EJS in a way to allow flexibility in how it operates, but still sticking to our core principle of players earning the right to attend. Players who continually demonstrate the commitment, attitude and work-rate to find out what they are capable of will have the opportunity to access more of the training and support we provide.

“The support of the players’ home coaches and parents is vital if the players are to have the best chance to find out what they are capable of. The one-to-one and group coaches sessions we have planned for the current lockdown provide another great opportunity to update everyone on how each player has done and what we need to them to focus on in order to progress.”