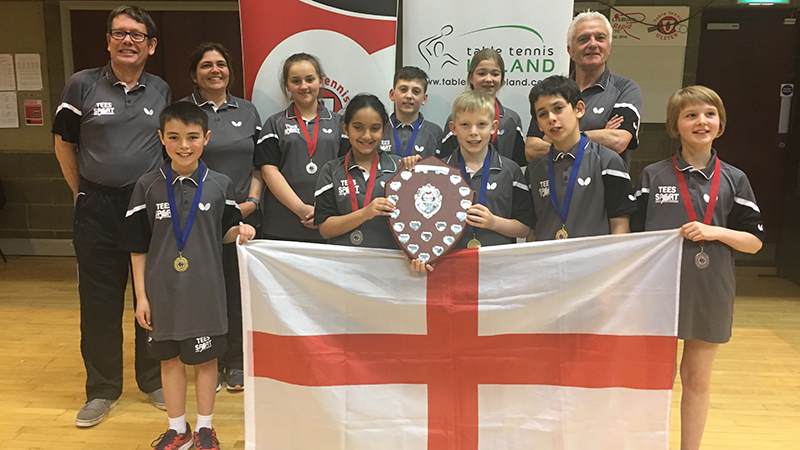 On the Friday and Saturday the team event took place in a cauldron of noise as parents and supporters roared their teams on, none louder than the enthusiastic English.

After four hard-fought matches, two teams remained unbeaten in both the girls and boys competition which meant an England versus Ireland gold and silver final match.

The girls’ match was one of the closest, most nailbiting contests to have graced the event. England eventually lost to the host nation 6-4 but out of the six games they lost, five of the matches went to five ends with match points saved by the Irish girls in four of them.

The England team of Sienna Jetha, Chloe Kay, Jessica Morris and Sophie Ackred did themselves proud with Jessica unbeaten during the competition, as were both doubles pairings.

The boys played an equally exciting match but this time the pendulum swung in favour of a rampant England team. They had won three matches 10-0 and only dropped one doubles in a 9-1 defeat of Scotland.

The Irish had similarly dominant results but the English came out 7-3 winners. The team of Joseph Cooper, Francesco Bonato, Louis Cheung Turner and Ralph Pattison were exceptional with both Joseph and Francesco unbeaten all day.

Sunday saw the individual competitions. In the girls, both Sienna Jetha and Jessica Morris made the quarter-finals but lost close matches – Sienna against the eventual winner from Wales in another five-setter.

Chloe Kay did really well to win the gold medal in the consolation event.

The boys’ competition again saw a dominant England performance with only Louis not making the semis as he was beaten by Ralph in the last 16. Ralph secured a bronze medal, losing to Joseph in the semi-finals, and Francesco also reached the final to meet Joseph. The standard of table tennis was at times breathtaking but it was Francesco who took home the gold medal after four closely fought ends.

The boys were expertly coached by Dave Pilkington and the girls equally so by Teresa Bennett.