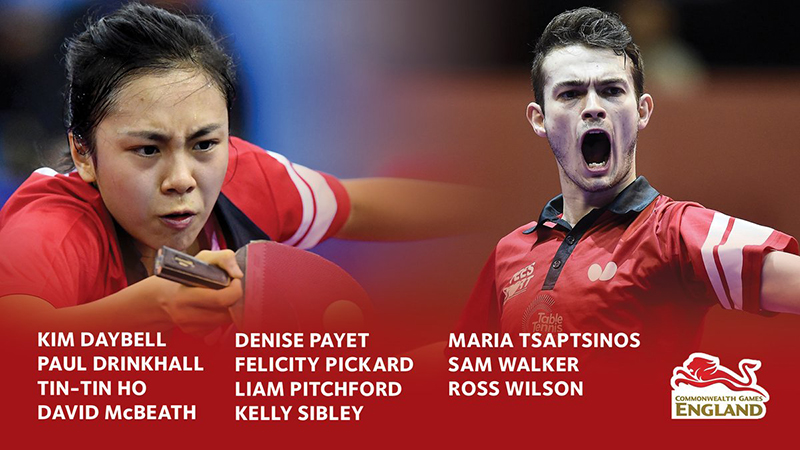 With less than two months to go until the Games in Australia, eight able-bodied and three para players will make up Team England’s table tennis squad.

Joining Paul Drinkhall and Liam Pitchford, who were confirmed in the men’s team last year, are Sam Walker and David McBeath.

Five of the selected athletes have previous Commonwealth Games experience and have won 12 Commonwealth medals between them at previous Games.

They will compete at Oxenford Studios when the competition gets under way on April 5.

I am very much looking forward welcoming the integrated table tennis athletes to Team England.

Paul and Liam were our first selected athletes to the Team, having achieved their qualifying standard a year ago, they are joined by extremely talented team-mates with good experience. I am very proud to be working with this group and look forward to supporting them at the Games.

I’m delighted to announce a squad which has an exciting blend of youth and experience. We travel with confidence that the squad will compete strongly for medals.

The selection process was very competitive, which bodes well for the future, including a home Games in Birmingham in 2022.

Drinkhall and Sibley will both be competing at their fourth Commonwealths, including the last time the event was in Australia at Melbourne in 2006.

The Commonwealth Games is a huge event. It’s something I’ve grown up wanting to win and obviously I managed to do that in the mixed doubles last time.

We want to win the team gold. That’s the first event and the first priority. For us, we’ve got the experience even though we’re a young team, and we’re up there with the favourites.

To be selected for any major Games is always exciting and I’m always really proud to represent England. My first Commonwealths were in Australia in 2006 and to compete there again at my fourth Games is really exciting.

I remember finishing fourth (in women’s team) in Delhi in 2010 and I lost the deciding match against Malaysia. It was one of the worst feelings I’ve ever had but I used it to spur myself on and in Glasgow me and Danny played fantastically to win that bronze.