Men’s captain Gavin Evans says England’s elite athletes are fitter than ever in body and mind as they ramp up training camps in preparation for when competitions can resume. 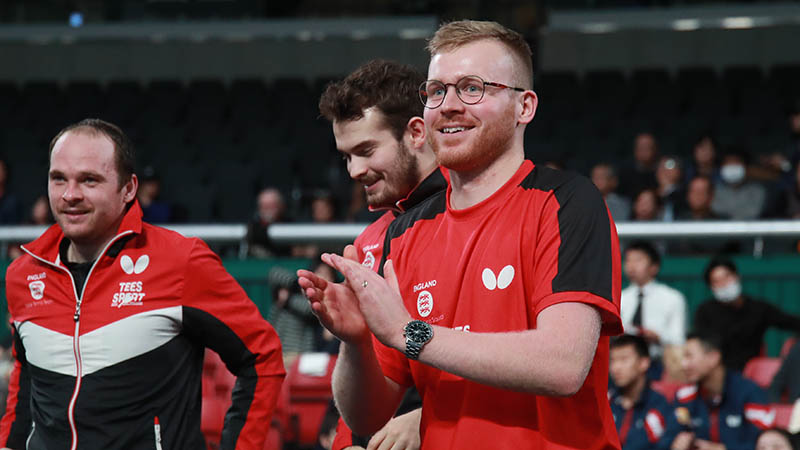 Men’s captain Gavin Evans says England’s elite athletes are fitter than ever in body and mind as they ramp up training camps in preparation for when competitions can resume.

Evans is currently working with Liam Pitchford and Paul Drinkhall in Dusseldorf, Tom Jarvis is also training in Germany at Ochsenhausen, while Sam Walker is working with the Croatian national team in Zagreb.

It is a big step for the players, who returned to the table in strictly controlled conditions in Milton Keynes last month but who are now really stepping up their on-table work following their enforced absence.

The lockdown period was far from a write-off, though, with Evans explaining that the performance coaches and players had used it to focus on physical conditioning but also on the mental and emotional side of the game.

“It’s a significant step for the players to be training again,” said Evans. “It gives that direction they need and the hope is that competition should follow in the not too distant future.

“The performance team have done a huge amount of work with the players preparing them for when practice is back on again along with developing other skills off the table that will inevitably help them on the table. I believe the senior team are now fitter than ever.

“The elite players throughout lockdown have had time to reflect on the skills they need to get better at to take them further in the game.

“They have understood thoroughly the art of deliberate practice and the ability to work in a far more structured way which will maximise every moment on the table.

“There is also time now to get better, as often tournament schedules can impede the hard, exhausting work, which can really be tough mentally.”

Evans recently led a Table Tennis England coaching webinar on the importance of deliberate practice – the ability as an athlete to enter a hall and know exactly what they are there to get better at on that day and how they are going to do that, and not waiting for a coach to tell them what to do and as a player having no idea why they are doing it or what is being achieved.

It is one of the central planks of the coaching structure across the England squads, from the Seniors down to the Junior, Aspire and Hopes squads.

The England Junior Squad have already had a training camp at Carlton le Willows Academy, and the younger Aspire and Hopes squads are returning on the coming weekends.

Along with deliberate practice, self-regulation is an important skill being instilled in the players from an early age. One of the aspects of self-regulation will see players at the Under-12 National Cup playing without coaches in their corners during matches.

Evans says that is something he strongly believes in, based on his personal playing experiences as a youngster, when he became European youth champion.

“I fully support this policy, as it is something I have first-hand experience of,” he said. “I have also been told by the current England players they wish they were taught at a younger age the art of self-regulation.

“The Table Tennis England Performance staff are fully aware of the added value coaches offer and in many instances the ability to turn matches around to achieve a winning outcome. This is not in question.

“However, at a younger age and specifically for performance players, this can be counter-productive due to an athlete creating a reliance on a coach to formulate their decisions.

“Our aim is to get our athletes in a position so when a coach is present at much larger-scale competitions and when they are performing on an international stage, the added value can be greater because the athletes’ ability to learn and control their own thoughts is also far greater.

“Many times in an athlete’s career they will enter environments that will either make them or break them, particularly overseas. Self-regulation and the ability to learn fast couldn’t be more important in these environments.

“Of course, there is an argument this can be learnt at an older age. However, my belief is in order to compete at the highest level in Europe and the world, the earlier players are exposed to this the better. Then, who knows, we may have medal winners again at European youths and beyond.

“I recognise from personal experience that winning at a younger age motivates players and fills them with confidence. However, I also understand some of the mistakes I made and the confidence I got once I knew how to learn quicker and how to plan my seasons far more effectively with the bigger picture in mind.

“I remember vividly failing in one of my most disappointing losses in a European Youth Championships when my preparation was solely focused on outcome. The following year I changed my approach around self-regulatory development and then won gold.”

Evans stressed that a coach’s support is important in helping young athletes to self-regulate, and that the National Cup as an event is perfect for allowing coaches and athletes to reflect on performance between matches.

He added: “The Under-12 National Cup is a tournament of 10 athletes most of whom are in our pathways and work with national coaches on these skills in their training day in, day out. There is no selection based on the result of the tournament neither do we feel the outcome to this competition has too much bearing on the athletes’ future successes.

“This competition gives us an insight into who is doing the work effectively with their home coaches and who has the ability to think clearly under pressure, control their emotions and ultimately deliver a performance that has come from within them rather than a coach.”

Referring to some criticism of the decision on social media, Evans said: “Table Tennis England’s mission across our pathways, with 80 athletes in them, is to help and support them to be the best in Europe and the world and not to see if they can win a national title because they have a coach who can influence what serve to do at deuce.

“Some coaches may for whatever reason not agree and that’s fine. If those coaches are developing great players, then the athletes will get opportunities.

“The performance team’s job is to systematically help players achieve what they are capable of and we believe this is the way from first-hand experience, but also from academic studies, based upon this.”