Drinkhall edged out in thriller

Paul Drinkhall came within just a few points of reaching the main draw at the Bulgaria Open as he was beaten 4-3 by China’s Zheng Peifeng in a superb match lasting more than an hour. 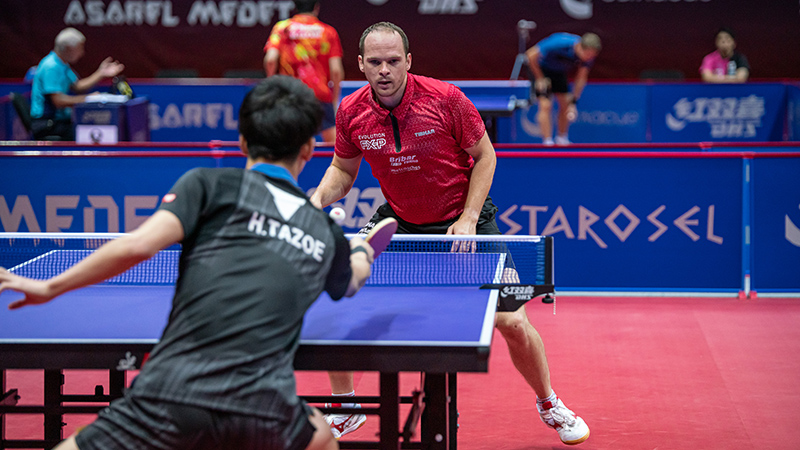 Paul Drinkhall came within just a few points of reaching the main draw at the Bulgaria Open as he was beaten 4-3 by China’s Zheng Peifeng in a superb match lasting more than an hour.

Drinkhall had met the world No 28 recently – at the Hong Kong Open in June – and although beaten 4-0, that match was close enough to give the Englishman reasonable expectations of joining sixth Liam Pitchford in the last 32 this time.

And so it proved as Drinkhall fought back from 2-0 and 3-1 down to take it to a deciding set, having had his own chances to lead the match.

The third saw another 10-8 lead for Drinkhall disappear, though this time he took the third chance and his seventh game point thus far, to peg it back to 2-1.

Zheng took the next 11-7, but Drinkhall blew him off court in opening up an 8-0 lead on his way to winning the next for the loss of only one point.

And when he took the sixth 11-5, it looked as if the momentum had truly reversed. However, Zheng eked out a lead in the decider and when he went from 6-4 to 9-4, he had enough in the bank to close it out 11-7.

The closeness of the match was illustrated by the fact Paul won 70 points to his opponent’s 64 in a match timed at 1hr 6min 7sec.

It all means Pitchford is the only English player left in the Men’s Singles – he plays Kou Lei of Ukraine tomorrow. The winner could face Peifeng in the last 16 if he comes through against his opponent, Chuang Chih-Yuan of Chinese Taipei.

Earlier, Drinkhall came through 4-2 against Hibiki Tazoe of Japan, including an 11-0 scoreline in the third. The Englishman was never behind and closed out 11-4 in the sixth.

Tin-Tin Ho had a tough task against world No 31 Han Ying of Germany in the Women’s Singles and although it was a 4-0 defeat, it was – after the first game – a close one as the final three games all went 11-9 in the German’s favour.