Paul Drinkhall and Sam Walker could be battling for the French League title come the end of the season, with both their teams up in the top three of the table after the first few rounds of matches. 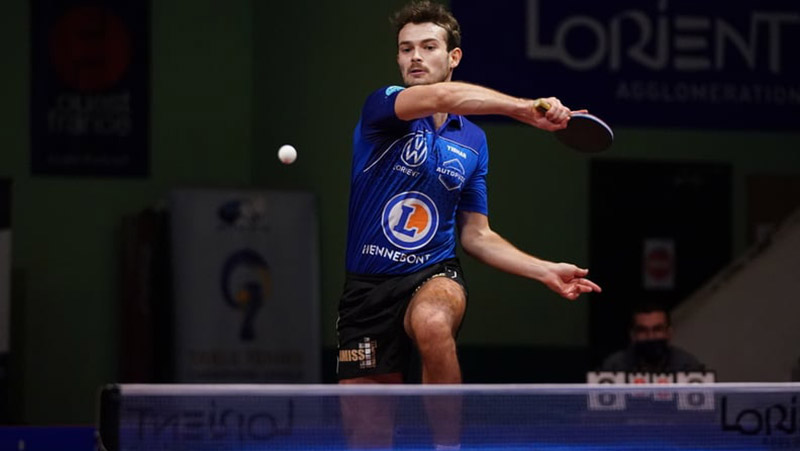 Paul Drinkhall and Sam Walker could be battling for the French Pro A League title come the end of the season, with both their teams up in the top three of the table after the first few rounds of matches.

Drinkhall has been in great form for Jura Morez, winning four of his five matches so far to help them to second place in the table, with a game in hand on leaders Pontoise-Cergy.

Hennebont, for whom Walker has played just one match so far, are tucked into third place, also with a match in hand.

That could all change with the latest round of fixtures due in the next few days – Jura Morez take on PPC Villeneuve on Friday (4.30pm UK time) and Hennebont meet Rouen on Saturday.

Drinkhall is new to the Jura Morez line-up but has started in top form as his team recovered from losing their first match 3-2 to Hennebont by winning three on the bounce.

The England No 2 said: “It’s been good. It’s a new team for me as well, so it’s a new experience. But after such a long time without matches and competition, it’s been good to get back playing again.

“Obviously, the break was a terrible thing to happen anyway, but I thought I was really getting into some form before that and what I’d been doing in training was starting to show on the table and I was really confident.

“After so long out, you don’t know how it’s going to go, but I was still confident and hadn’t forgotten what I’d done. I managed to stay very calm with it all and pick up where I left off.

“Obviously, it’s good to win. It’s what I’d been working on the last 12, 18, 24 months, trying to be more consistent. People know that when I play well, I can get good results, but it was too much of a guessing game when I was going to play well. I’ve worked on that and I’m more confident I can get myself to the table playing well and doing what I need to do rather than chasing a good feeling.”

Walker said: I’ve only played the one match so far but it was good. I felt like I played okay and had good chances to win, so I feel disappointed not to take those chances, because that puts me out of the team.

“I don’t know when I’ll play again, so it feels slightly strange. I’ve been practising well and doing the right things in practice and I feel I’ve improved as a player in the last eight months. When I do get another chance to play, I’ve got to take the opportunity with both hands and get some matches under my belt.

“On paper, I’m No 4 but we’ve got a really strong team and I’m a good player and I’ve shown I can win matches in this league. I believe I can be one of the best players in the league, given the chances and if I hit my form.

“There’s a reason why I’m at this club and they value me as a player – and I value myself as a player as well – so I’ve got to be ready to play.”

With a good start giving both teams momentum in the league table, both will have ambitions to stay in the shake-up for the title.

World No 56 Drinkhall, whose team-mates are Kirill Skachkov (#54), Bojan Tokic (#66) and Benedek Olah (#85), said: “We want to win the league. Last year, the league didn’t finish but they were in the top two when it ended, and the year before they won it.

“We’ve got a really strong team with four players who can all step up and win games. The atmosphere is really good. There’s obviously a lot of good teams and good players, but we’ve got our minds set on being the best.

On Hennebont’s chances, Walker added: “It’s goes without saying at a club like this that we’re there to try to win titles. We’ve made a good start and hopefully we can keep that going.”