Josh Bennett & Tin-Tin Ho won the battle of the surprise finalists to take the title against Alim Hirji & Emily Bolton. 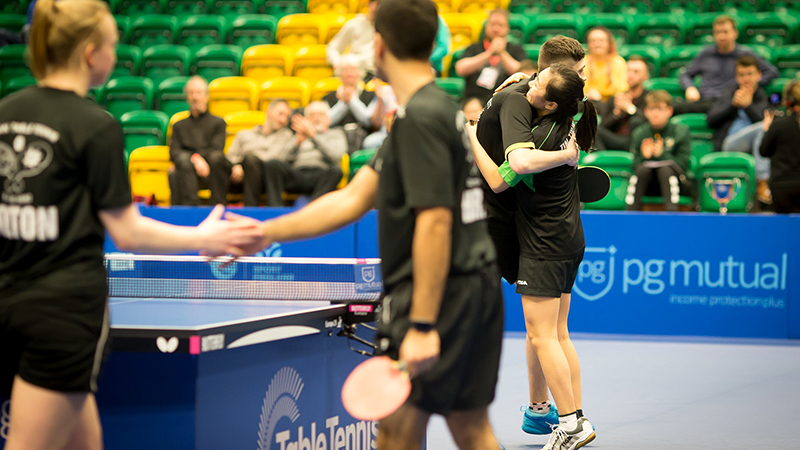 Josh Bennett & Tin-Tin Ho won the battle of the surprise finalists to take the title against Alim Hirji & Emily Bolton.

Both pairs, having seen off higher seeds in the semi-finals, would have sensed the opportunity to clinch a senior national title. And, no matter who won, it would have been a first senior title for at least one player – only Ho had previously won any (well, plenty).

Click here to visit the event homepage, for all the results and other information

On winning that first title, Bennett said: “It’s unreal, unexpected . . . it’s a great feeling, especially at 9 o’clock in the evening. Whenever I’m playing with Tin-Tin, you always feel you have a chance, we had to play really well to win it.”

It was also a victory on home ground – the pair are University of Nottingham students – and Ho added: “It was really great playing with Josh because we could practise before at university and we had great energy and communication.”

The silver medallists had mixed emotions – pleased to have reached a major final but a sense of what might have been.

Hirji said: “We built our way into the tournament. I’m happy we got here because we played well, disappointed because it’s an opportunity missed but we did our best and hopefully we can return next year.”

Bolton added: “We played really well, we didn’t play that well in the round of 16 match (a 3-1 win over Ethan Walsh & Megan Gidney) but then we found our form. We had our chances here and there in the final, but credit to them.”

There were some nervy moments as they led the third 10-8 only for two ferocious McBeath winners to peg them back. But when they got a third chance at 12-11, the fourth seeds took it – McBeath earning a yellow hard for throwing his bat to the floor in frustration.

There was also a match point saved in the other tie, where Ho & Bennett took down the top seeds Tom Jarvis & Maria Tsaptsinos. They needed their second match point to win the deciding fifth set 12-10, having come from 1-0 and 2-1 down in sets.