Last year’s semi-finalist Chris Doran and two-time champion Andrew Baggaley are among those chasing glory at the World Championship of Ping Pong this weekend. 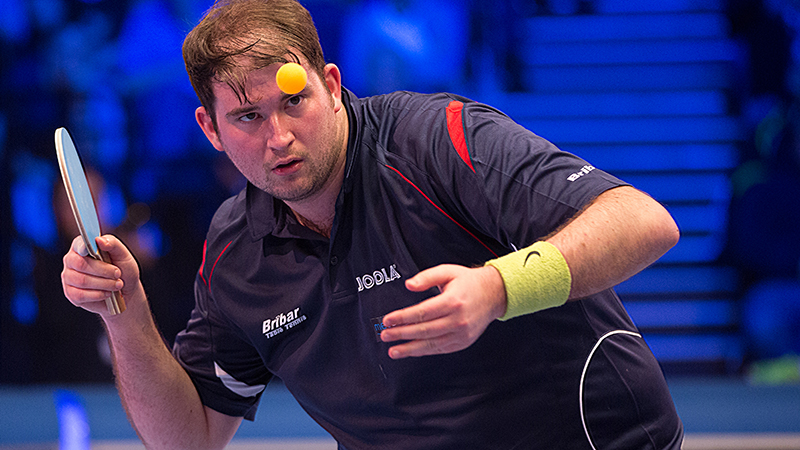 Last year’s semi-finalist Chris Doran and two-time champion Andrew Baggaley are among those chasing glory at the World Championship of Ping Pong this weekend.

The English pair are joined by a number of other home countries players as they take on the world’s best exponents of the sandpaper game at Alexandra Palace.

The competition starts with the double-elimination group stage on Saturday, comprising eight groups of eight players. Each player is guaranteed two matches – two wins takes them through and two defeats means elimination. Players with one win and one defeat play off in a third match to decide who progresses.

Doran, the only non-Chinese player to reach the last four in 2018, is the top seed in Group C, which also includes Lubomir Pistej of Slovakia and Ian Johnston of Scotland. Doran’s first opponent is not yet known – it will be a qualifier from the last chance qualifying tournament today – while Johnston starts against Germany’s Dwain Schwarzer.

Doran has been struggling with a chest infection but has largely shaken it off in time to play and has tuned up with a few days’ training alongside Baggaley, Johnston and Alexander Flemming of Germany, the runner-up in 2015 and 2017.

He said: “My level is really good, it’s just whether I can cope physically because I’ve not played a great deal this year.

“Having said that, the gap between matches is not too bad this year and you do get a bit of time to recover, so if there’s a time to be slightly ill maybe it’s better now than previous years.”

After the group stage, the competition features an FA Cup-style draw for the last 32, though group winners will be kept apart.

Doran added: “You can’t really plan or prepare and you could be on the receiving end of a bad draw but the first thing is to get through the group, which I realistically aim to do, and then you have to take it match by match.”

Baggaley heads Group F and will start his tournament against Roman Puchkin of Russia. Scotland’s Gavin Rumgay is in Group D and begins his campaign with a tie against Ireland’s Zak Wilson.

Ashley Stokes of England is in Group B, with last year’s beaten finalist Huang Jungang of China and three-time winner Maxim Shmyrev of Russia. Stokes starts against Jakub Dorocinski of Poland.

Northern Ireland’s Paul McCreery is in Group A and will face defending champion Wang Shibo of China in his first match. Group H includes Ireland’s Gavin Maguire, who plays Robert Janke of Germany first up.

Meanwhile, Baggaley has been telling Table Tennis Daily his thoughts ahead of the event, as well as taking on Dan Ives in a one-set exhibition. You can watch the video below.