It was a tough first day for England at the World Schools’ Table Tennis Championships in Malta, losing all their matches despite some noteworthy individual performances. 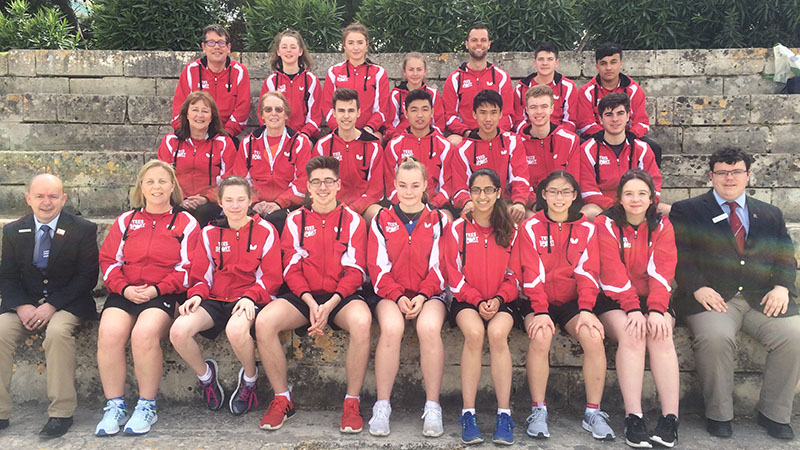 It was a tough first day for England at the World Schools’ Table Tennis Championships in Malta, losing all their matches despite some noteworthy individual performances.

The event is held every two years and is a week combining friendship, culture and competition which brings together some of the best junior players in the world in competitions for schools and nationally selected teams.

The nationally selected boys’ team had a tremendous tussle in their opening contest, eventually going down 4-3 to Slovakia. Each of the team won one match with Joseph Hee putting in the strongest performance, beating the highest ranked Slovakian player in five ends. Joe Clark and Shayan Siraj also won a game each.

The two crucial games were the doubles and Hee’s second singles. The doubles was lost 3-0 but the Hee singles went to a fifth end and brought the noisiest match in the hall. Hee, despite some incredible defending was unlucky to lose 13-11, after conceding an edge and a net in the last few points. In their second match England went down 6-1 to Poland with Hee the only winner.

The nationally selected girls’ team were unlucky to play two very strong teams on their first day, losing 7-0 to both India and Chinese Taipei. In these matches the girls did pick up ends with Kate Cheer taking one Indian girl to the fifth end and both Charlotte Bardsley and Jasmine Wong winning ends against both teams.

Whitgift School are representing England in the schools competition and also played tough opposition. James Smith managed to win a pulsating first match against a Turkish school player but Whitgift went down 6-1 with George Hazell narrowly losing a five-set match. In their second match it was an even worse result with Belgium winning 7-0.

Charles Read School are representing England in the girls’ school competition but only had one school to play on the first day. They also faced a school from Istanbul in Turkey. The score went to two games each with wins for Mollie Patterson and Danielle Kelly. However, Turkey had a strong number one player who won her two matches and helped Turkey win the doubles to take a 3-2 lead.

Up next for Charles Read was Darcie Proud who went into a 2-1 lead and in a tight fourth end showed great sportsmanship in admitting her opponent had got an edge when only Darcie had realised. Her opponent went on to win the end 11-9 and also the final end to put Turkey into an unassailable 4-2 lead. The final result was 5-2.

England are hoping for a better day today when again the opposition will be tough and they will have to be at the top of their game.