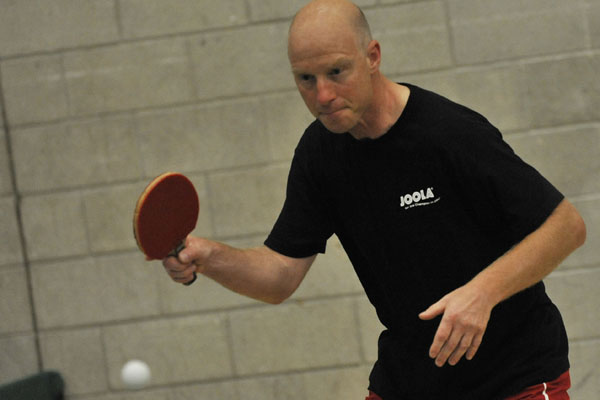 The Devon Junior and Senior Championships were played at Eggbuckland Community College last weekend and attracted a record entry for many years.

The senior event proved to be full of high quality matches with Paul Whiting continuing his fine form in reaching the final of every event including winning the Men’s singles title, overcoming stiff resistance from Torbay’s Krys Piwowar and beating Kevin Buddell in the Veterans singles final.

Lacinska-Piwowar in an excellent final.

The Junior event attracted players from all over the county and from as far away as Hong Kong as little known Cheung Kai Fung from Stover School proved too strong for all his competitors, sweeping aside everybody in the Boys under 15 event.

However, Plymouths’ Jordan Bone produced the match of his life, saving match points against Cheung in a highly entertaining Boys under 18 semi-final, eventually winning the match and continuing his form in the final beating Plymouths’ Ollie Buddell to the title. Jordan also won the boys doubles title with Josh Millman.

Millman was in top form and beat Torbay’s Tom Haggerty in the Under 13 final. Ben Deakin won the Boys under 11 title with a fine display beating Ben Deakin from Totnes in the final. The Junior Girls also produced some high quality matches with Okehampton’s Naomi Jackson winning the under 18 event beating Saltash’s Beth Wilson into the runners-up position.

The pair then teamed up to win the girls doubles title. Torbay’s Jaz Johns won the Under 15 title from sister Holly who later won the Girls under 13s overcoming Francesca Maestri from Plymouth. Okehampton’s Zoe Bennett won the under 11 event beating club mate Emily Haskell into runners-up position.

The new facility also benefitted from the London 2012 Olympic Games legacy as the flooring used at the table tennis event was secured for the new facility. It will soon be open to all to come along and enjoy with an extensive program of both children’s and adults’ table tennis coaching – available from absolute beginners to international standard.

If anybody would like more information on the various coaching and open practice sessions on offer do not hesitate to contact Kevin Buddell on 07836550308 or email [email protected].