Delight for county champions on return to play 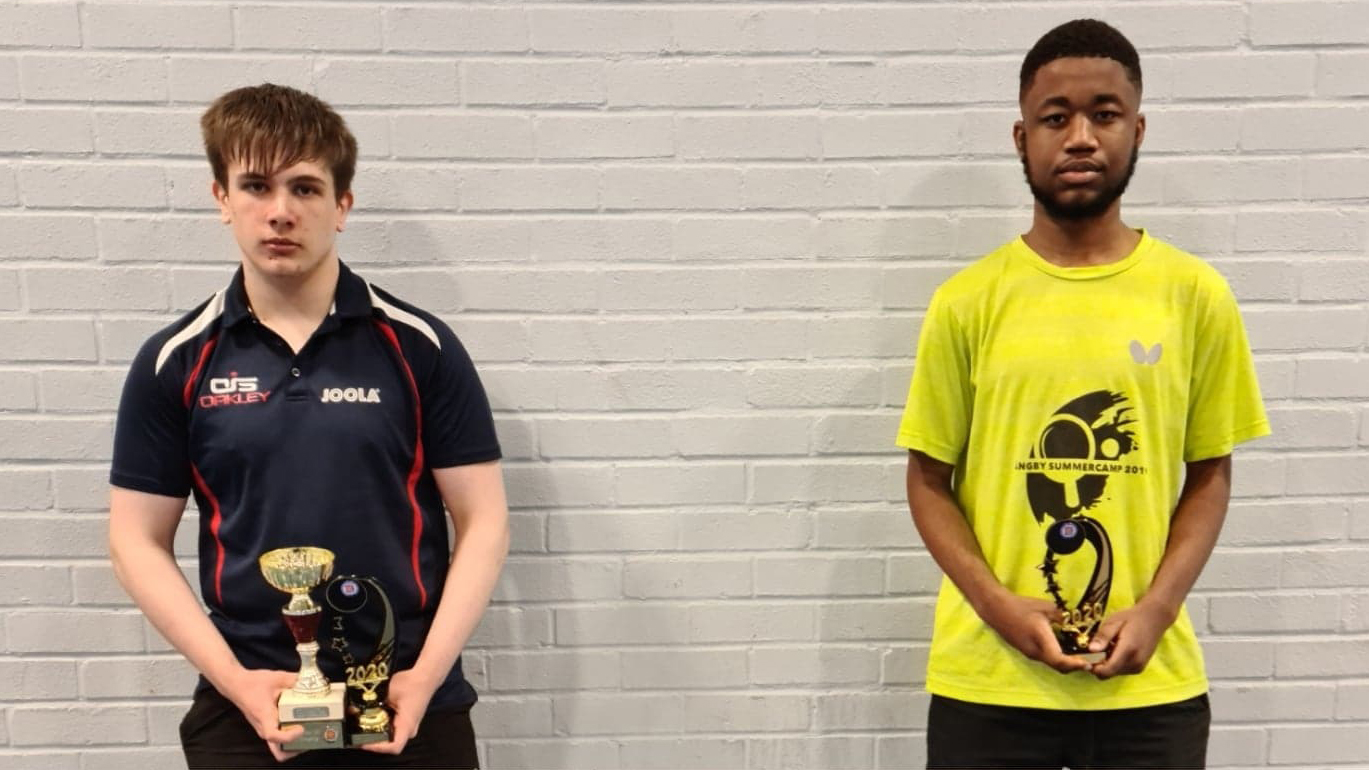 Sunday 16 May was a great day for the young table tennis players across Northamptonshire as they finally had the opportunity to play some competitive table tennis for the first time since the March 2020 with the hosting of the annual Northants County Junior and Cadet Tournament, which had originally been planned for September 2020.

Eighteen of the best young players in the County aged between seven and 17 came together at the excellent Westfield Table Tennis Club in Wellingborough to compete in the cadet boys (under 15), junior boys (under 18) and girl’s events.

Although several of the more experienced players were unable to take part for a variety of reasons, it did open up places in the event for some of the younger players who we might not normally see at an event like this until they reached their teenage years, and it was fantastic to see the standard and energy of these younger players.

The junior age category had just five entrants this year and this was reduced to four when one of the players withdrew due to illness.  Alex Cochrane went into the tournament as number 1 seed and reigning champion and was joined by fellow Northants County Squad team-mates Virgil Birch-Annan, Vincent Pham and Caspian Wagner. Mia Solomon who was playing in the girl’s event also joined in as a “guest” player.

Whilst others were having close matches, Cochrane seemed determined to put down a marker as we return to competitive play and duly retained the title he won in 2019, dropping just one game in total as we became a two-time Northants County Junior champion. Birch-Annan took the runner-up position with Pham in third place and Wagner fourth.

The lack of girls playing across the County at a competitive level was highlighted by the fact that there were just three entrants in the girls’ event.  This was reduced to two players when one the entrants failed to show-up so became a one-match play-off for the right to be crowned Northants champion. Mia Solomon went into this match against Gabriela Koszyk as the favourite having much more match experience. Koszyk put in a very good display and did put her experienced opponent under some pressure but Solomon held firm to record a 3-1 (11-5, 11-13, 11-8, 11-5) victory and become a County champion for the first time.

The boys’ cadet event had 12 boys in it plus the runner-up in the girls’ event as a “guest” player. The format was one group of six and one group of seven with participants playing everyone else in their group followed by a play-off against the player who finished in the same position in the other group. The top two in each group would play in a semi-final and then third-fourth place play-off or final.  As a guest player, Gabriela Koszyk’s results would not be counted when working out the final group positions.

Group A consisted of top seed and reigning champion Ben Aldridge, Lucas Turnbull-Stubbs, Rushabh Patel, Luke Pettitt, Fabian Squires and Bart Koszyk. This was also the group that had Miss Kosyzk competing in as a guest.

Aldridge, Turnbull-Stubbs and Patel all have some experience of competitive play and are part of the Northants County Squad but for Pettitt, Squires and the Koszyk this was their first real time competing at this level. This gulf in experience was highlighted in the results with the three more experienced players gaining comprehensive wins against the newer players so the matches between each sub-group were always going to be the key clashes. Aldridge gained a clear 3-0 over Patel and with Turnbull-Stubbs defeating Patel 3-1, the final match in this group would decide who would top the group.

As befitting a match between the top two players in the group, it was a close game and after five excellent games of table tennis it was Aldridge who took the win with a 12-10, 5-11, 11-9, 4-11, 11-9 success to remain unbeaten in the group. Turnbull-Stubbs finished second with Patel (three wins) in third. Pettitt recorded two wins to take fourth ahead of fifth-placed Squires (one win) and seven-year-old Koszyk in sixth place.  It should be noted that Gabriela Koszyk scored four victories in her guest role.

Group B contained second seed Ansh Shah as well as Arthur Warburton, Adam Koszyk, Prithvi Menon, Daniel Pettitt and Prasad Sardesai. Similar to group A, this group had a split between those who had previous competitive experience at this level and those that were playing at this level for the first time.

Shah confirmed his status as the second seed with five victories, dropping just one game to Koszyk in the process. The match between Koszyk and Warburton was always going to be vital in the battle for second place and with the former taking it 3-0 (11-9, 13-11, 11-7), Koszyk secured the runner-up position in this group with Warburton coming third.  Fourth place went to Menon (two wins) with Pettitt (one win) in fifth and Sardesai sixth.

In the play-offs for final positions, Sardesai defeated the youngest Koszyk sibling in the 11th-12th place match, Daniel Pettitt (ninth) saw off the challenge of Squires (10th),  Menon (seventh) took out Luke Pettitt (eighth) and Warburton (fifth) claimed the spoils in his match with Patel (sixth).

Aldridge found himself up against club colleague Adam Koszyk in the first semi-final and although tested by Koszyk, he was able to record a 3-1 win and move into the final. The second semi-final saw Shah record a comfortable win over Turnbull-Stubbs to set up a final between the top two seeds.

The final of the cadet event was also the final match of the day and it proved to fine climax to the first tournament back with the advantage swinging one way and then then the other between the two young contenders. Aldridge drew first blood with a 12-10 game and then moved closer to retaining his title when he moved 2-0 up courtesy of an 11-7 scoreline. Shah wasn’t done yet though and held his nerve to take the third game 13-11. With momentum now in his favour, Shah levelled the final at 2-2 with an 11-7 game.

The fifth and deciding game was both exciting and nailbiting and it was probably best that parents were not allowed in to watch due to the Covid-19 guidelines! Aldridge looked like he had regained control of the match as he earned two championship points when he edged 10-8 ahead but a run of four consecutive points from Shah turned the outcome of the match on its head and meant that Shah became the Northants County Cadet champion for the very first time.

Westfield Table Tennis Club Chairperson and coach Kevin Bird said about the event: “It’s been a difficult time for many over the last year and in particular for those of school age so it was great that the Northants County Table Tennis Association were able to run this event and give the young athletes the opportunity to finally play some competitive matches.”

Northants County Coaching Officer Henry Arthur echoed Bird’s comments and said: “Sport and physical exercise can be so important to many people and the benefits of sport on an individual’s mental wellbeing is well documented. It has been a tough time for many people and there were some concerns about returning to play but it was fantastic to see the sports hall buzzing again and be able to provide the opportunity for the young athletes to get back to doing something that they love and take so much enjoyment from.”

Many thanks to Mike Wildman, Kevin Bird, Clare Coles, Andy Wood and Claire Cochrane for the help and assistance in running this event. As always we rely on a small but dedicated team of volunteers to enable events like this to take place. If you are interested in stepping into a voluntary position then please get in touch with a member of the NCTTA committee.