The ParalympicsGB table tennis team is guaranteed another two medals from the team events after reaching the semi-finals in the men’s class 6-7 and men’s class 8 events. 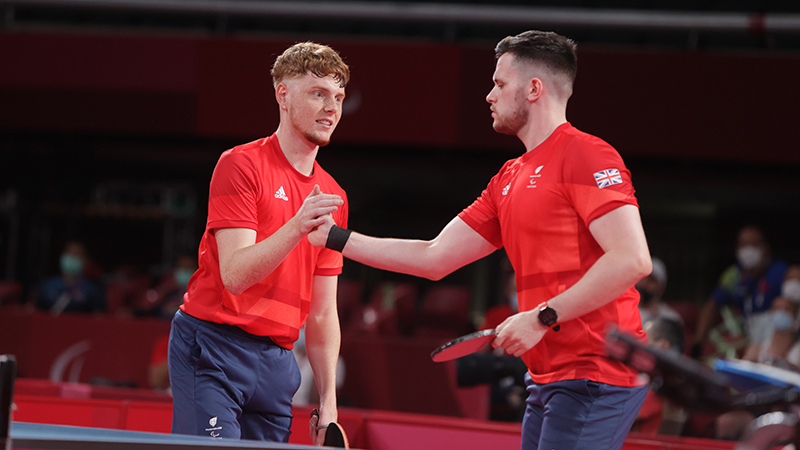 The ParalympicsGB table tennis team is guaranteed another two medals from the team events after reaching the semi-finals in the men’s class 6-7 and men’s class 8 events.

Billy Shilton will take a medal on his Paralympic debut, having combined with Aaron McKibbin to beat Hungary in men’s class 8, while Paul Karabardak and Will Bayley are assured of team medals to add to the singles medals they won in men’s class 6 and men’s class 7 respectively.

Bayley and Karabardak won world and European team medals together before Karabardak moved from class 7 to class 6 in 2015. They were reunited for the first time since then today and in their quarter-final they beat Australia, represented by class 7 Jake Ballestrino and class 6 Oceania champion Trevor Hirth.

The British pair made the perfect start, taking the doubles 3-0 and Bayley then came through against Hirth 3-0 to set up a semi-final tomorrow against European champions Spain.

“I’m really pleased,” said Karabardak. “We had a good draw but we still had to go out there and do a job and we did that job as professionally and efficiently as possible. I’m really pleased that I can get my hands on another medal here.

“The World Championships in 2014 is the last time we played together but we started practising a month ago and we were better than ever, like we’d never stopped playing. We’ve always had a good chemistry and it’s really good that we’ve continued that and I think it can set us up to do really well in this team event.”

Bayley looked sharp and showed no sign of tiredness after some tough matches in the singles.

“I actually feel it is a fresh start for me and I think we played really well,” he said. “We had to do a job and we know it was a favourable draw but we still had to go out there and perform. They got some balls back and made us work for it so it was good. It’s nice to play with Paul again – it’s been so many years so it’s great to be back together again.

“Spain tomorrow is going to be an epic match – one of the biggest of our career and I’m really up for it. We’re ready and playing well so I’m looking forward to it.”

With world champion Ross Wilson unable to play having tweaked his back in the warm-up Shilton teamed up with McKibbin in the opening doubles and understandably they took a while to get into their stride. Having lost the first game 12-10 they led 7-3 in the second but at 7-6 GB head coach Greg Baker called a timeout and they went on to take the game 11-9 to level the score.

That appeared to settle the pair and they were always in control from that point, taking the third game 11-6 and a forehand winner from McKibbin sealed the fourth 11-6 for a 3-1 win.

Shilton then took on Csonka in the first singles. The 22-year-old from Stonehouse in Gloucestershire had won their last three matches most recently at the Polish Open in 2020 in five sets and he made a good start, moving quickly to 5-1 and then keeping his focus to see out the game 11-8. From that moment Shilton grew in confidence and having won the second game 11-5 he took the third 11-7 to win the match 3-0 and secure a place in the semi-final and a guaranteed medal for his team.

“Obviously there was a last-minute change of plan with Ross having a little niggle in the warm-up,” said McKibbin, “but that is what is so good about our team, we have three really strong players. All three of us reached the quarter finals in the singles, we can play any combination at any time and we know that all three will be good.

“Me and Billy had quite a lot of experience last season playing doubles together so we knew we could bring it in. The first game was a bit shaky but we took our time and then that performance there from Billy was unbelievable. I’ve never seen him play that good – I literally knew from point one that he would win.”

“I think with the situation at the start there was a bit of uncertainty whether I was going to play or not,” said Shilton, “so I knew I had to step up and that was probably the best I’ve ever played. I was really nervous in the doubles but Aaron calmed me down really well. In the singles I knew he (Csonka) would be nervous because I’ve won the last three matches against him so I knew I had a chance if I played my best game. I’m lost for words, to be honest.

“I don’t think it has really sunk in but I’m so happy. Thanks to Aaron and Ross for all their support leading up to this point. We’ve still got a match tomorrow against China in the semi-finals so the job’s not done yet – we need to push on now and try and better the bronze medal.”

McKibbin is assured of his third Paralympic medal after taking bronze in the men’s class 6-8 team in both London and Rio with Wilson and Will Bayley.

“Obviously Rio was amazing beating China,” he said. “We have another opportunity tomorrow and I’d love to go one better and get to the final. It’s going to be tough – China are a top team but we’ve definitely got the ammunition to beat them if we bring our level.”

After their heroic win against Spain this morning Ashley Facey Thompson and Joshua Stacey took on Paralympic champions China in the quarter-finals of men’s class 9-10. They fought hard in the doubles against class 10 world No 3 Lian Hao and class 9 world No 7 Zhao Yi Qing, going down 11-5 in the fifth.

Facey Thompson then took on Lian in the first singles and although he took the second game 11-9 to level at 1-1, the World championship bronze medallist was just too strong and took the match 3-1 and the tie for China 2-0.