Men’s Band 1
Yorkshire’s Kim Daybell was in imperious form at Scotstoun as he powered to the Men’s Band 1 title at the Tees Sport West of Scotland Grand Prix on Saturday evening.

The young Englishman denied his Scottish hosts the chance to see a local product pick up the big title on day one in Glasgow as he fought off the challenge from Scot Richard Main in the final. 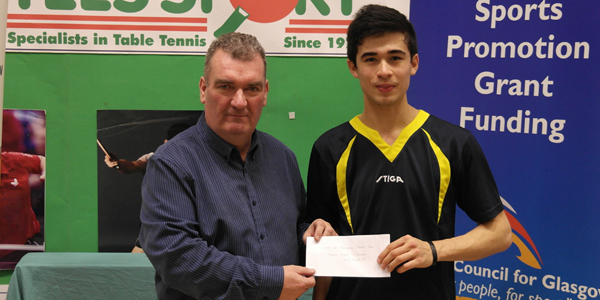 Daybell’s campaign didn’t begin well as he was comfortably beaten by young Scottish star, Chris Wheeler 3-0 (11-7, 11-5, 11-6) in the group stage, before progressing through in second place.

However, after that blip the Team GB athlete was on top form to reach the final in double-quick time. He brushed aside the challenges of Welsh pair Conor Edwards and Dean Cundy (both 3-0) en route to a late appearance under the cameras in Scotstoun. 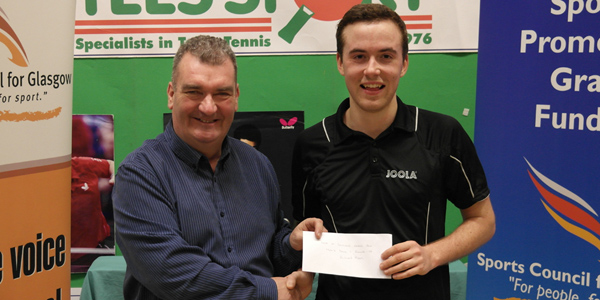 Perhaps fatigued by his earlier performances, Main was unable to resist Daybell’s early pressure and quickly fell 2-0 behind. Although he fought back to storm the third game 11-3, he was frustrated when his comeback ended narrowly in a tightly-contested 13-11 fourth game.

Women’s Band 1
Top ranked Chloe Thomas justified her seeding at the Tees Sport West of Scotland Grand Prix with a commanding performance throughout Saturday’s play at Scotstoun to secure the Women’s Band 1 title.

Arriving with the Welsh squad at 8am there was a chance the Welsh girl could start slowly when play got underway in the event at 3pm.

However, despite the five-hour wait and touch-and-go 3-2 victory over first opponent Emma Ludlow, Thomas kicked into groove and made the semi-finals after winning group 1.

The semi-final lineups were a mix of an all-Welsh affair and an all-Scottish affair as Thomas met compatriot Nicole Hall while Gillian Edwards faced fellow Scot Lynda Flaws.

The final didn’t quite live up to the build-up as the top seed was firing on all cylinders. Thomas cruising to her Band 1 title from Glasgow in three games after a long Saturday at the office.

Men’s Band 2
Ryan Farrell was the victor in the Men’s Band 2 at the Tees Sport West of Scotland Grand Prix with a straight games victory over Matthew Man in the final.

This time it was Farrell, a runner-up from group 1 who had already beaten Darryl Strong and Anthony Barella in the knockouts, who faced Man in front of the cameras.

This time Man could not continue his good run under the spotlight as Farrell won in three straight ends for another Irish success.

However, undeterred by her earlier defeat, Scottish girl Whitaker fought through her preliminary round 3-0 against Rhian Williams before also seeing off Paulina Orzechowska (3-0) and fellow Scot Lynda Flaws (3-2) to reach the final.

But, in a reversal of their earlier group meeting, Whitaker was dominant and powered to a comfortable 3-0 victory to seal the title.

Men’s Band 3
Yaser Razouk won the Men’s Band 3 after completing his successful campaign with consecutive victories over an Englishman, an Irishman and a Scotsman – but his performances were no joke.

Playing in only his second Grand Prix Razouk ensured his maiden win on home soil with a confident series of performances. Having beaten Bonne Habekost, Peter Wilkinson and Blair Fowler to win group 2, he took the second seed spot for the knockout draw.

He first opponent was Jody Bevington (ENG) who was fresh from a 3-1 victory over Iain Wood. The Englishman’s form showed as he raced out of the blocks with an 11-8 opening game.

Thoroughly in his stride, the junior international saw off Andy Dunlop in three straight games at the last stage to wrap up his first Grand Prix title in Glasgow.

Things were going well for the Scottish contingent in the Women’s Band 3 as Elliott made short work of Welsh girl Soffi Jenkins before beating compatriot Rhian Williams in just four ends.

However, her title hopes were dashed by the impressive Lynch-Dawson, who was full of energy in a one-sided final.

Men’s Band 4
Ireland’s Kevin Hutchinson stole a march on the numerous Scottish contingent inside Scotstoun by walking away with the first title from the Tees Sport West of Scotland Grand Prix.

In fact, the Irishman beat his own compatriot, Tom Davis, in the final – completing a knockout round home nations treble over David Wetherill (ENG), Andy Dunlop (SCO) and finally Davis. 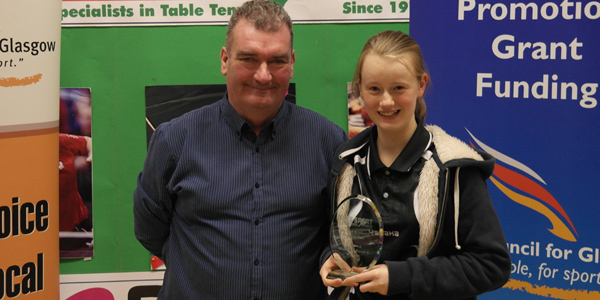 Plaistow crucially beat both of her nearest rivals (Taylor and Cameron) en route to picking up the main prize.

Both were successful winners of their respective groups but still headed into the knockout stages needing to win four more matches to take the crown.

Armitage was destructive in his early rounds beating both Stuart Halliday and Cameron Hussain 3-0 before dropping his first game in three matches in the opening end against Calum Morrison in the semi-final.

Cameron, potentially tired from energy-sapping matches against John Hannah (3-2) and Andrew Grant (3-1) managed to battle through the opening ends and keep pace with the younger Armitage as the match headed to a deciding fifth.

The contest remained neck-and-neck throughout the final end until Armitage finally made a move at the close and saw off the challenge of Cameron 11-8.

Both players than had to progress through a preliminary round before embarking in their knockout run to the final. Hannah beat Rowan Exton, Cameron Hussain and Calum Morrison while Halliday defeated Tomasz Kupis, Jamie Arnott and Peter Cameron.

Their second meeting, this time for the main prize, turned out to be a tight affair with the opening two games both being won in deuce by Halliday. However, rather than fall to defeat, Hannah pulled out all the stops to win the next to games before closing out a classic match with a 15-13 deciding end.

* Due to internet connection problems there is a limited twitter service but you can watch tables 1 and 2 on livestream from QuipuTV including the Men’s and Women’s Singles Finals.