Nottinghamshire Veterans first team took their third straight County Championship Premier title when they fought off a spirited challenge from Yorkshire and Sussex. 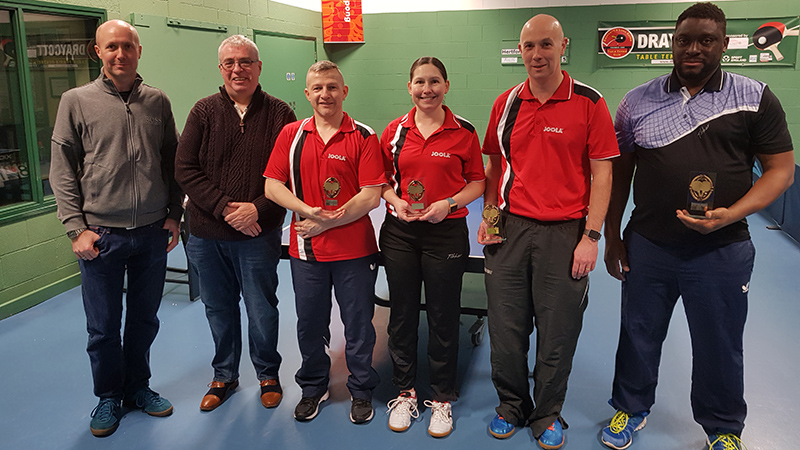 Nottinghamshire Veterans first team took their third straight County Championship Premier title when they fought off a spirited challenge from Yorkshire and Sussex.

With Yorkshire leading the table on sets from Notts and Hertfordshire  at the beginning of the second weekend’s action at Draycott, a below-strength Hertfordshire were the first side to fall away as they suffered two defeats on Saturday.

With Yorkshire and Notts both recording two victories, their Sunday morning clash was looking tasty. Sussex recorded two wins on Saturday and moved into third place, waiting for a slip-up from either of the top two.

Notts raced off to a 4-0 lead with wins by Mark Green over Simon Pugh, Michael George against Tim Dyson, Jason Ramage over Chris Clinton and a comfortable mixed doubles win by Ramage and Sarah Short over Pugh and Janet Adams.

Yorkshire hit back as Dyson just beat Green 3-2 in a thriller (11-8, 11-9, 10-12, 9-11, 11-9), which was followed by a three-game win by Adams over Short. When Dyson and Pugh took the men’s doubles in another five-gamer against Ramage and Green there was only one set between the teams as Notts led by the odd set in seven.

Any thoughts of a heroic Yorkshire victory were quickly put aside as George beat Clinton in three and when Ramage beat Pugh in four it was Notts who had recorded a match-winning 6-3 lead, leaving Yorkshire to take the final mixed doubles to complete the match as a 6-4 win for the reigning champion.

Although Notts had established a two-point lead over their rivals there was still a great deal at stake as Notts had to overcome a tricky encounter with Leicestershire who themselves were scrapping for their very survival, while Yorkshire faced Sussex who themselves could take the title with a big win, but were relying on Leicestershire doing them a favour by beating Notts.

As things turned out the likelihood of Sussex taking the title quickly evaporated as the matches progressed.

At virtually the same time as Yorkshire reached their fifth set against Sussex, as Dyson beat Adrian Moore in four games and guaranteed the White Rose county at least the runners-up spot, Chris Rogers and Jason Ramage were involved in a five-game thriller which gave Notts the point they required to retain the title. The match ended in a draw, with Yorkshire going on to beat Sussex 6-4.