John Dennison was presented with his Pride of Table Tennis Awards Regional Coach of the Year honour at Fusion TTC recently. 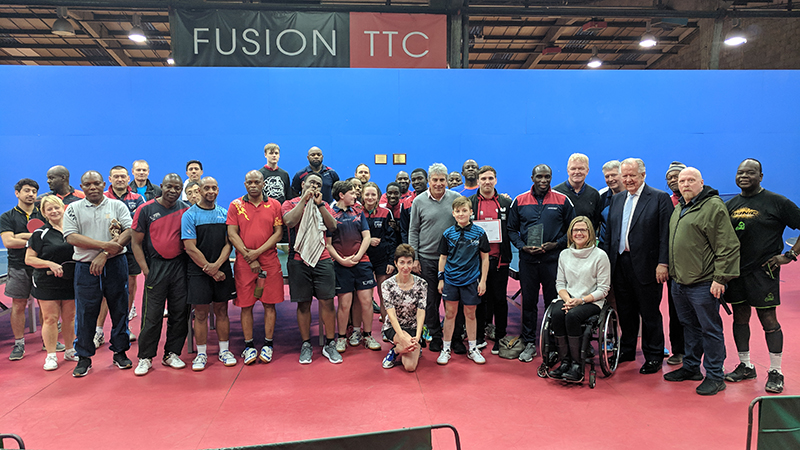 John Dennison was presented with his Pride of Table Tennis Awards Regional Coach of the Year honour at Fusion TTC recently.

John was nominated for his dedication to the club and developing junior players, many being ranked in the national top 10 and being regulars in the international circuit. One of John’s standout achievements this year was coaching a junior boys team in the Junior British League Premier Division and supporting the girls’ second team in getting promoted to division 1.

He was also runner-up in the Pride of Table Tennis national awards in a very strong category which was presented at our National Conference in Leicester.

On the evening Table Tennis England went to present the award, we were joined by the trustees of The Surrey Canal Sports Foundation which was established in 2011 to provide world class facilities for school, community and elite use in South East London and to preserve those facilities for future generations. The foundation has established Fusion TTC current venue whilst a new sport centre “Energise” in New Bermondsey, is being established. Some of the Trustees are pictured below.

It was great to have those trustees from the foundation to see John be recognised for the amazing work he has been doing in the club. John Inverdale, a well-known presenter on both BBC and ITV sports coverage was also challenged to a Table Tennis game – which members took great delight in.

Johnathon Driscoll, programme activator for TTE and responsible for the Pride programme said: “The amount of hard work and dedication that John has shown is exceptional. The Coach of the Year award recognises the outstanding contribution given to encourage more people to play table tennis, alongside developing players to reach their full potential in the last 12 months. This is something John has achieved in abundance.

“His award for London Region Coach of the Year is well and truly deserved. It was a special evening to celebrate his achievement with his club members and The Surrey Canal Sports Foundation.”