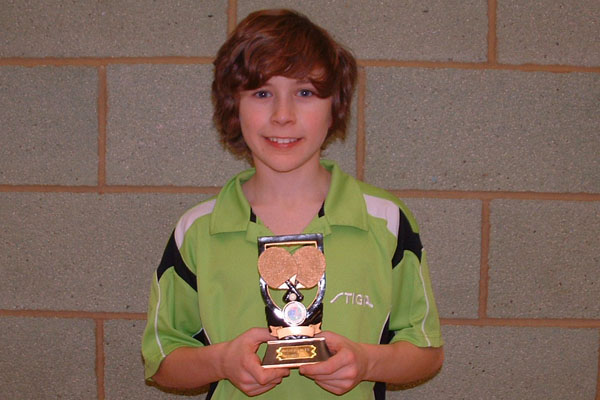 Sam Hume went into the history books this week as the second-youngest winner of the Clacton and District League’s Handicap Singles Trophy.

Annabelle took the early initiative, dominating play with a flurry of dazzling attacking shots. But Sam, showing a maturity beyond his years, weathered the storm, eventually intimidating Annabelle with his consistency, determination and flair to take control.

It was a well-merited success for young Hume who had been in impressive form throughout the Tournament, disposing of Tom Wilkin, Debra Found, John Plummer and, in a semi-final of high-quality and drama, Paul Newbould.

Defeat was a disappointment for Annabelle whose uninhibited hitting had been a major factor in eliminating Colin Stallwood, Ian Fielder, John Barton, Jonathan Found and Tony Robinson en route to the final.

The Tournament saw some fine performances from unexpected quarters, none more so than Paul Newbould who (-3) beat off the challenge of Adam Cuthbert (+1) 11-9 in the decider in Round Three.

Credit also to Tony Robinson who, playing with a borrowed bat, surprised everyone – including himself – by reaching the semi-final before fatigue and Annabelle Rodriguez’s hard-hitting put paid to his trophy dream.

David North was another player to have an eventful day. North (+1) defeated Gavin Price (-3) 11-9 in the decider in Round One before

Two other lesser-lights of the League, Jonathan Found and John Plummer, also shone brightly, both playing with unexpected gusto and determination, both excelling to reach the quarter-finals, both exceeding their hopes at the start of play.

With forty-one competitors, the Tournament again proved its popularity and, once again, it produced a surprise winner, Sam Hume becoming the twenty-fifth different player to win the title in the Tournament’s thirty-one year history.

For the record – and statistical anoraks – Sam failed by just twenty-one days to become the youngest-ever winner of this trophy. Sam achieved it aged 12 years and 205 days but, in the 2006 season, Matt Wright won the Tournament aged 12 years and 184 days.

* In Division One of the League, Nomads Panthers marched on with a 10-0 success against Walton B, Colin Webber taken to five by Paul Newbould as was Gill Locke by Graham Buxton but both stayed unbeaten, as did James Denyer.

Brotherhood A were 9-1 winners against bottom-team Nomads Jaguars, all the matches settled in three-straight except for an unprecedented 3-1 (11-7, 1-11, 11-5, 14-12) victory for Jaguars’ skipper Brian Parish over a previously-unbeaten Dave Binns.

Hat-tricks for Colin Stallwood and Gary Cattermole saw Windsor Condors beat Windsor Eagles 7-3 for a second time this season, the closest match of the evening being Phil Smith’s 11-9 in the decider victory over Condors’ captain John Pattrick.

Brotherhood B beat Nomads Lions 8-2, Martin Edwards unbeaten, and John Owen and Ian Graham each winning twice. Nomads’ John Weller lost 11-9 in the fifth to Edwards but defeated Graham 11-6 in the decider.

Nomads Ocelots defeated Brotherhood G 8-2, Doug Green unbeaten, Andy North and reserve Alan Dockerill taking two each. But the match could easily have gone the other way with the Ocelots winning all four matches that went close in five, the closest seeing Dockerill beat Dan Malinowski 12-10 in the fifth and Jordan Blanche-Price 11-8 in the fifth, while Green defeated Elliott Attrill 13-11 in the decider.

Three for Allen Denyer helped Brotherhood I to an 8-2 success against Nomads Leopards. Rowan Cottee and James Smith-Daye each contributed a pair for the winners, as did Tony Rayner for the losers.

Windsor Swallows were forced to field a guest player against Nomads Pumas and so will feel pleased ending up sharing the points. Angela Barratt stayed unbeaten for the Swallows whilst Caroline North, making a welcome return to local table tennis, defeated Lionel Goddard in three-straight, John Bowers 12-10 in the fifth and only just went down 11-8 in the decider to Alan Dockerill.

Nomads Bobcats moved to the fringe of the promotion race with an 8-2 victory over a weakened Brotherhood M, Denise Thompson unbeaten for the winners.

Finally, it was 8-2 for Nomads Wildcats against Windsor Kites, Brian Friday and Peter Miller unbeaten, and Hazel Blanche taking two for the Wildcats. But the Kites had the satisfaction of a doubles win – their first-ever in the League in over two-and-a-half years of trying – Carl Hubbard and Mick Simson defeating Miller and Blanche 11-9 in the fifth.