Brotherhood I of Division Two are the new holders of the Clacton & District League’s Handicap Knock-Out Cup, the first side from outside the top flight to take the trophy since 2013. 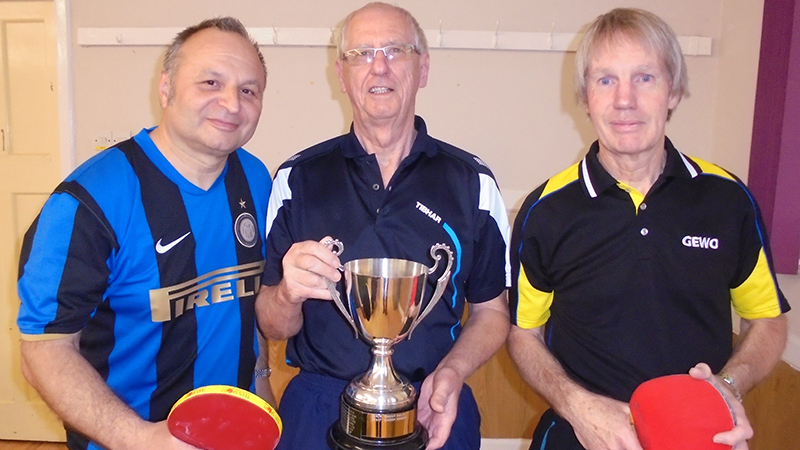 Brotherhood I of Division Two are the new holders of the Clacton & District League’s Handicap Knock-Out Cup, the first side from outside the top flight to take the trophy since 2013.

In this week’s Final, the Brotherhood trio of Graham Parkes, John Owen and Fred Gallone prevailed over Division One team Windsor Condors to scoop the honours, coming back from 3-2 down to take the last three singles and a deserved 5-3 victory.

Holiday commitments meant the Brotherhood side were missing the ever-reliable Paul Alden. But it was the absence of Mel and Ollie Rampton from the Condors line-up which ultimately proved more decisive, resulting in first Cup call-ups this season for Greg Green and Martin Hogg, to play alongside captain Annabelle Stallwood.

As is often the case, the opening doubles proved a cagey affair with both pairs, Parkes and Gallone (+1) for Brotherhood and Hogg and Stallwood (-5) for the Condors, prodding for openings. The first two sets were shared but Brotherhood took an early lead in the third to take it 11-3 and although the Windsor pair clawed their way back to trail just 4-3 in the fourth, Parkes and Gallone motored on to give their side an early match lead with a 3-1 (9-11, 11-6, 11-3, 11-7) victory.

Match three saw the closest handicapped game of the final with Parkes (+1) facing Stallwood (-1). As the handicaps suggested, there was little to choose between the two players, a fact reflected in the match, with the players sharing the first four sets. And although Parkes changed ends 7-5 up in the decider, Stallwood clawed it back to 9-9 and, with two excellent serves, clinched it 3-2 (7-11, 11-2, 7-11, 11-6, 11-9) to take the Condors into a 2-1 lead.

Now it was time for Brotherhood to strike back and it was the often under-rated Gallone (+3) who defied the pundits to take an unexpected win, hardly needing his handicap advantage to level the scores with a straightforward 3-0 (11-1, 11-4, 11-2) victory against an out-of-form Hogg (-8). All-square at the interval

The first match after the break saw Owen and Parkes (+1) take on Green and Stallwood (-5), and the foursome produced one of the most engaging matches of the evening, the 3-0 (11-8, 11-8, 11-7) scoreline in favour of the Condors hardly reflecting the tightness of the match and the entertainment of the rallies.

But that was the extent of the Condors’ success as Brotherhood took the next three singles.

The Parkes (+3) v Green (-8) encounter proved to be a cracker of a match with the Brotherhood captain taking full advantage of his points’ start to launch a series of powerful offensive forehands which the elegant Green, in unusual defending mode, retrieved with calm assurance from the back of the court, much to the delight of the spectators. But a combination of Parkes’ relentless attacking and points’ advantage ultimately won the day, the winning point coming after a superb rally of attack and defence. The final score was 3-1 (11-1, 8-11, 11-4, 11-9).

By contrast, match seven was far more low-key, with Owen (+2) growing in confidence to win 11-0, 11-3, 11-6 against Hogg (-5), who failed to retrieve his handicap in the first set. The victory edged Brotherhood into a 4-3 lead and just one match away from taking an unlikely Cup success.

It was a second Cup success for Owen, a winner with St Andrews B in 1994, and also for Parkes, who had won with Brotherhood J in 1995, but it was a first trophy for Gallone in his first-ever appearance in a Cup Final.

It crowned an excellent season for Brotherhood I, who completed the unusual double of Cup and Division Two winners, with the side remaining unbeaten during the season in 25 League and Cup matches.

* The League’s Annual General Meeting takes places on Tuesday 4th June at the Brotherhood Hall at 7.45pm. The presentation of trophies for the 2018/19 season will take place at the conclusion of the meeting.