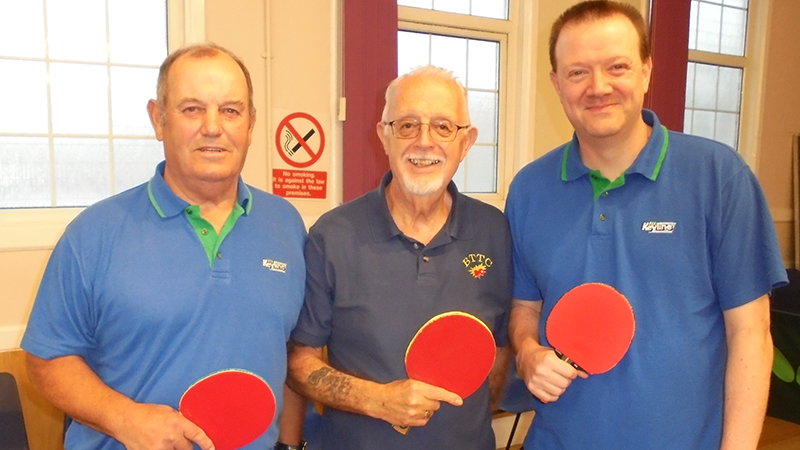 In the final, Duncan Dunne, Tony Edmonds and Rodney Betts proved too good for their Windsor Penguins’ opponents, winning 5-2 to cap a highly-successful season, having already been crowned Division Three winners.

However the Penguins, in the form of Jackie Bunce and Paul Dale (+1), got on the score-sheet first in the final by taking an unlikely victory after losing the first two sets and being 9-7 down in the fifth against Tony Edmonds and Rodney Betts (-3).

But there followed three keenly-fought singles in which the Brotherhood trio exerted their control, taking all three matches, despite starting on (-3) against their opponents (+1) in all three matches.

Duncan Dunne defeated Alan Charman, coming back from 10-1 down in a crucial second set to win 13-11, Betts beat Bunce despite some audacious hitting from the Penguins’ player, whilst Edmonds overcame Dale in a clash of youthful super-vets.

The Penguins fought back in match five to reduce the deficit to only one, Dale and Charman (+1) taking advantage of a generous ration of nets and edges, to take the middle doubles against Betts and Dunne (-3).

But this proved a mere hiccup, Dunne (-5) defeating Bunce (+1) in a contest of the captains, the fourth erratic set seeing Dunne retrieve his handicap at 0-6, level at 6-all, go down 6-10, before eventually winning 12-10.

That made it 4-2 to Brotherhood, leaving Edmonds (-1) to administer the last rites, defeating Charman (+1) to end the valiant Penguins’ challenge.

* It was a good week for the Brotherhood Club with Division Two champions Brotherhood I confirming their place in the final of the Handicap Knock-Out Cup with a nail-biting 5-4 semi-final win over First Division Nomads Lions.

The match swayed all evening but Brotherhood crucially took all three doubles, including a tight first match, Paul Alden and Graham Parkes (+1) beating Jason Lloyd and Adam Wilkin (-1) 11-9 in the fifth.

The next four matches alternated between the teams, the closest seeing Jason Lloyd (-3) scrape past Parkes (+1) 11-8 in the fifth to level at 2-all. Brotherhood took the middle doubles, only for Ethan Lloyd (-3) to level the scores by edging out Alden (+1) 14-12 in the fifth.

Jason Lloyd had a comfortable win over John Owen in a scratch match to give the Lions the lead for the first and only time, before Parkes (+1) overwhelmed Wilkin (-3) to take the match into a decider.

In the final, Brotherhood I will meet top-flight Windsor Condors. It takes place on Tuesday 30th April at the Brotherhood Hall, starting at 7.30 pm. All spectators are welcome.

* In Division One of the League, Windsor Hawks won 9-1 against a Brotherhood D side forced to field two reserves. Andy Vincent and Felipe Rodriguez took hat-tricks for the Hawks. Russell Hillier, battling bravely against the odds, picked up the losers’ sole point with an 11-6 in the decider win over John Barton. Alas for Brotherhood, it means they will definitely finish in the second relegation place.

And there was no luck either for Lawford, rooted at the foot of the table, as they went down 10-0 to Walton B. There were trebles here for Derek Willis, Colin Dearman and Paul Meikle, although Meikle struggled 11-7 in the fifth against Richard Spence, as did Dearman against Charlie Denholm, 11-9 in the fifth.

In Division Two Brotherhood F ended their season with a 7-3 success over Windsor Buzzards, the Brotherhood side having achieved the notable honour of fielding the same three players in every League match. On this occasion, Lee Allen took his maximum, Shaun Beckham won two and Barry Allen one. John Harvey won two for the Buzzards but lost to Lee Allen.

* Team Secretaries should ensure all remaining results cards are with the Press and Records Secretary by Friday 26th April, the last playing day of the season.

* The League’s Annual General Meeting takes place on Tuesday 4th June at 7.45pm at the Brotherhood Hall. The presentation of League trophies for the season will take place at the end of the meeting.