Adam Cuthbert is one of the most improved players in Division One of the Clacton & District League and this week he chalked up his second hat-trick of the season to lead the Nomads Lions to a vital first win in the current campaign. 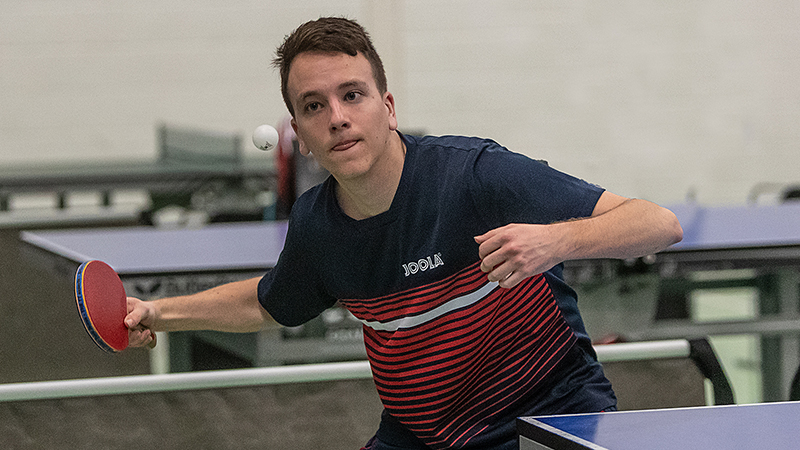 Adam Cuthbert is one of the most improved players in Division One of the Clacton & District League and this week he chalked up his second hat-trick of the season to lead the Nomads Lions to a vital first win in the current campaign.

In a tight tussle against relegation rivals Walton D, the Lions emerged 6-4 winners, with Cuthbert once again proving his team’s spear-head to take an important treble.

His team-mate Adam Wilkin gave solid support, taking a couple and combining with Cuthbert to win the doubles. Wilkin was involved in three close singles matches, defeating both Mark Ratcliffe and Mark Gale 11-6 in the decider but losing 11-7 in the decider to Paul Meikle. For Walton, Meikle won two, and Gale and Ratcliffe one apiece.

In another encounter involving bottom-four sides, Windsor Hawks avoided defeat for the first time this season by drawing their match with Walton C. Every player took at least a point but Walton’s Peter Burrows was the man of the match, staying undefeated.

Graham Buxton and John Marshall each took one for Walton. Buxton was involved in three five-setters, excelling to defeat Andy Vincent 11-8 in the fifth but going down 5-11 in the fifth to both Felipe Rodriguez and Ian Fielder. Rodriguez was the Hawks’ best player, winning twice, with Fielder and Vincent each winning once.

The battle at the foot of the table looks like being the closest it’s been for many years, with just a point covering Walton C, Walton D and Nomads Lions, with Windsor Hawks only five points further ahead.

At the other end of the table, a treble for Gary Young, two for Daniel Young, one for Gavin Price and a Gary Young/Price doubles success saw Walton A to a 7-3 victory over club-mates Walton B.

Paul Hume took a well-earned hat-trick for third-placed Windsor Eagles against Brotherhood A but a pair each for Luke Burridge, Martin Edwards and Kevin Gowlett ensured Brotherhood ended as 6-4 victors.

In Division Two Brotherhood B are pulling away at the top, this week whitewashing Windsor Kestrels 10-0. John Owen, Martin Scarfe and Grant Sharpe again did the business for Brotherhood but the Kestrels nearly pulled out a consolation victory in the final match of the evening, Sharpe scraping past Graham Bunce 3-2 (6-11, 7-11, 11-8, 11-7, 11-9).

Lawford lost ground when they were held to a draw by an on-fire Brotherhood D trio in one of the hardest-fought matches of the season so far. Five matches went the distance, only two matches were settled in three-straight, no-one stayed unbeaten, every player picked up at least one point – and there were a number of surprise results.

A Brotherhood C team without Mark Salter was still good enough to beat Windsor Harriers 6-4 to retain third-place. Russell Hillier remained unbeaten, Barry Allen won two, with the pair sharing a doubles win. But the Harriers nearly earned a draw, Allen having to beat Ferdy Rodriguez 11-9 in the decider in the final match of the evening to secure the win. The result moves Brotherhood C to within a point of second-placed Lawford.

But Windsor Buzzards are quietly moving up the table and, following their 10-0 whitewash of Nomads Bobcats, they’re only six points off the second-placed spot themselves. Pete Bloomfield, Dave Martin and Andy Cawley all recorded trebles, Cawley involved in the only five-setter of the encounter, winning 3-2 (8-11, 11-4, 11-7, 13-15, 11-4) against a spirited Dave Harris who was making his first appearance of the season for the Bobcats.

Three for Daryl Lott, two for Doug Green and one for Chris Petrou saw Nomads Jaguars to a 6-4 victory against lowly Brotherhood E. Their closest individual victory was Lott’s 11-5 in the fifth win over Kevin Pryor although Green had a hard fight before overcoming Rodney Betts 3-1 (10-12, 12-10, 12-10, 11-9).

For Brotherhood, Pryor won two and Duncan Dunne one, Dunne beating Petrou 11-6 in the fifth and taking Green close before going down 11-4 in the fifth. Pryor and Dunne took the doubles to maintain Brotherhood’s excellent doubles record, having won five of their seven doubles’ matches so far.

In Division Three Walton E have taken over at the top of the table following a 10-0 win against a depleted Nomads Lynx and, with a good all-round squad, are beginning to look a realistic bet for honours.

But, after a stuttering start to their campaign, pre-season title favourites Windsor Magpies are moving nicely into gear, this week defeating Nomads Leopards to record a third consecutive 8-2 victory.

Dave Sweetland’s maximum for the Magpies included an 11-8 in the fifth win over Bob Jillins whilst there were two each for Alan Rutledge and John Plummer. Sweetland and Plummer also took the doubles 3-2 (13-11, 9-11, 10-12, 11-4, 11-3) against Jillins and Dave Wright. Jillins won the two Leopards’ points.

Six promising juniors were on show in the Windsor Merlins v Brotherhood F fixture and, after a competitive contest, Brotherhood emerged 7-3 victors. Ben Bryden stayed unbeaten although it was a narrow 3-2 (12-10, 15-17, 11-8, 6-11, 11-9) against Joe Plummer. Elliana Burridge won two and Alex Marsh added one, with Burridge and Bryden sharing a doubles success. For the Merlins, Sam Plummer took two and Joe Plummer one.

Finally, Nomads Ocelots moved off the foot of the table with a 6-4 win over a Windsor Robins side which fielded a guest. Sue Lee, making her first appearance of the season, John Magill and Hazel Blanche each won one for the Ocelots but none of them could get the better of an unbeaten Neil Chegwidden, who also shared a doubles win with Mick Coker.