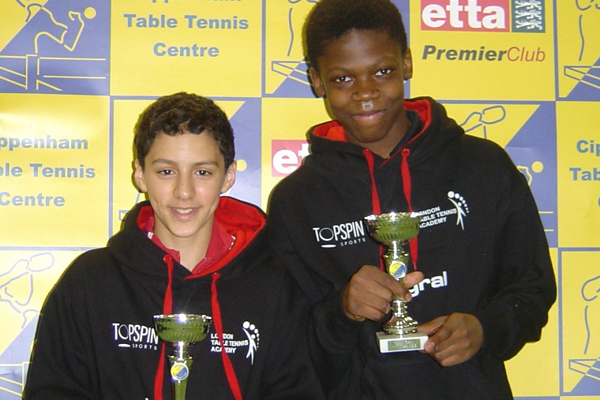 They might have been the last to enter, the twenty-fourth team in a capacity event just two days before the event, but was the youngsters from London Table Tennis Academy who were still standing at the end of a tiring but very enjoyable day’s table tennis. The event was the Cippenham Team 2-Star Open, an event which is unique in England in two respects. It is the only open tournament in the country in which the participants progress through the draw in teams of two and it is the only event that uses the progressive knock-out format, ironically a format in which no team gets knocked out but all play on until their final finishing positions between 1 and 24 are established.

The London team was Gabriel Achampong, ranked 18 in England juniors, and Omar Kassal, ranked 10 nationally in the cadets. At the start of the day they were together ranked only the ninth best team of the twenty-four in a field that included England number six ranked man Chris Doran teaming up with Cippenham’s Events Officer Steve Smith.

London started their campaign by upsetting the seeded Horsham Spinners in the preliminary round group. This match saw Omar Kassal suffer his only defeat of the day when he lost to Rory Scott. However, Gabriel Achampong beat Amila Thilakarathna and then also the deciding rubber against Scott to secure victory. An easy win over The Barnet Beasts meant that London took their place amongst the eight group winners.

The first round after the group stage brought together group winners. Winners of those matches were drawn against others had finished second in their group and had then beaten another second-placed team. In that first round, London Academy were pitched against Godalming. Alain Choo-Choy took first blood for the Surrey-based team beating Achampong over four games but Kassal equalised the score with a similar result against Andreas Pusch. The losers of the two matches were then required to play the deciding match. Achampong won the first two games against Pusch but was pegged back to 2-2 before finally securing victory for his team 11-7 in the fifth game.

In a conventional knock-out tournament that would have been the end for Godalming but the progressive knock-out system afforded them a redeeming chance in a repechage. Choo-Choy and Pusch took full advantage with a 2-0 win over their Toin opponents Kiyonori Udagawa and Tomofumi Kato to establish themselves in the top eight and relegate Toin to the second tier where they eventually finished in ninth position. Toin were another seeded team that missed out on top spot in their group when beaten by Westbury, Andrew Hodges and Phil Marshall. However, neither side managed to get into the top eight and Westbury’s eventual finishing place of eleventh was two places below Toin as they paradoxically lost to the same team in round four.

What about England number 6 Chris Doran? He and Steve Smith got through the preliminary group stage without a problem when any tie-break was decided by a match between the players winning the first two sets. However, in the progressive knock-out the focus switched to each team’s number two as any deciding set was played between the two losers. Cue Smith who managed to beat Phil Marshall 11-8 in the finish to establish his team, called Chewie & Jabba Strike Back, in the top eight. That, though, was as far as he could take his team as an 11-9 fifth game loss to Barbara Izyk and then a tie-break loss to Matt Spero lost the quarter-final against K United and they eventually finished seventh.

The semi-final line-up was complete when London Academy beat the son and father team of Shaun and Steve Hall, masquerading as Hallmark Hurricanes, after Shaun had beaten Achampong in the opening set, Godalming had a relatively more straight-forward 2-0 win over JBL Rejects, Ben Larcombe and Alex Forshaw, and Bristol Academy dismissed Horsham Spinners 2-0.

Both semi-finals were won 2-0 but the top match was far from comfortable. Achampong had to come back from 2-1 down to get the better of Matt Spero and then Kassal followed up the good work of his team mate with another five game victory over Izyk. Godalming, meanwhile, needed only four games in each set to overcome Bristol Academy as Choo-Choy defeated Dean Cundy and Pusch beat Dan Ives. 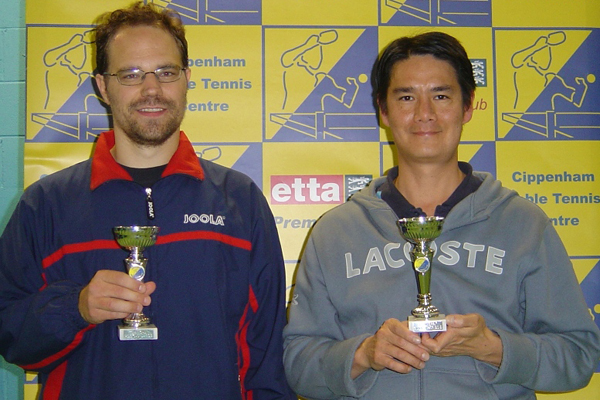 So London Academy and Godalming, who had met in round 1, met again in the final and the result followed the same route. Achampong lost the opening set 11-6 in the fifth to Choo-Choy, after leading 2-0, then Kassal evened up the score 3-1 against Pusch. In the battle of the losers Achampong was in full flow as he beat Pusch 11-2, 11-7, 11-9 to claim the Team Open title for London Academy while Alain Choo-Choy maintained his unbeaten record on the day.

The tournament was organised and refereed by Graham Trimming.