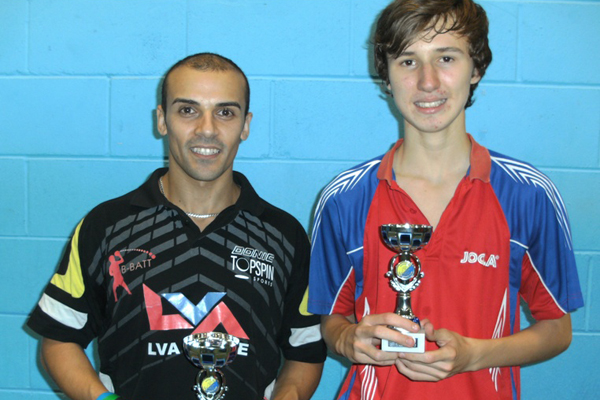 Top seed Eli Baraty must have thought it was not his day when he lost twice in his preliminary round group in the Cippenham Super 6 2-Star Open. After seeing off Elena Cockrell and Cliff Scott in comfort he was stunned to lose 12-10 in the fifth and deciding game to Ho Yin Lee, a player with more than 1,750 fewer ranking points, and then also to Ray Jordan. As a result, Jordan, who beat Lee 16-14 in the fifth game of another exciting encounter, came through to top the group with Lee second and Baraty in third place, surviving the cut between the championship and the consolation events by the narrowest of margins.

However, that fired Baraty up and he strolled through the rest of the day hardly challenged to win the whole event in the most unlikely of scenarios. Displaced out of the seeded positions by his preliminary round failings, Baraty proceeded to dispose of Group 6 winner Hon Kau Choy in the first knock-out round, then third seed Ping Ho in the quarter-final, Group 7 winner Alex Forshaw in the semi-final and then Group 5 winner Daniel Barna in the final, all without the dropping of a single further game. Some come-back!

Group 4 was the closest fought group ever seen in an open tournament at Cippenham. The six players shared the results out as closely as possible, with three beating three of their opponents and the other three winning twice. Two three-way ties in one group of six players has to be unique! More than half of the fifteen matches also required a deciding game to be played. When the referee had finished his calculations it was Martin Matuzevicius, the lowest ranked player in the group, who was declared in top spot, followed by Mohammed Owadally and Alan Cherry. Johnny Bispham, who had beaten Cherry, Phil Marshall, who had beaten Matuzevicius, and Jack Josephs, who had beaten Owadally, were consigned to the consolation event.

Group 6 was nearly as competitive with, again, more than half of the matches needing a decider. Choy, who won four times but lost to Thomas Jeffcott, ultimate winner of the consolation event, topped the group but second, third and fourth places had to be decided on count back as Danny Lewis, Rory Scott and Jimmy Yeung won three each. Yeung was the unlucky one who was relegated to the consolation event where he reached the final at which stage his group win over Jeffcott was reversed and he had to settle for runner-up.

On his way to the final, Daniel Barna won all his group matches and then proceeded through the knock-out stages with wins over Andrew Hodges, 11-9 in the fifth, Mickel Miller 3-1 and, in the semi-final, Ho Yin Lee 12-10 in the fifth.

The extraordinary tournament was organised by Paul Baker, refereed by Mick Strode and attached a near maximum entry of 43 players.