China too strong as GB trio have to settle for bronze

The men’s class 8 team of Aaron McKibbin, Billy Shilton and Ross Wilson will take bronze after going down fighting in their semi-final against China today. 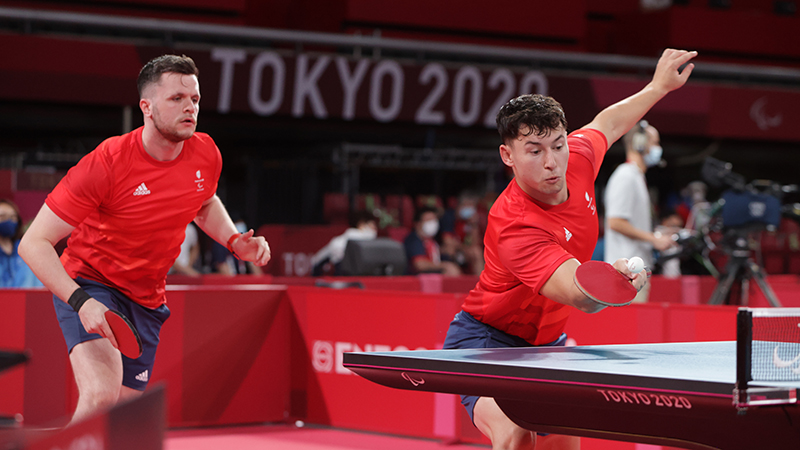 The men’s class 8 team of Aaron McKibbin, Billy Shilton and Ross Wilson will take bronze after going down fighting in their semi-final against China today.

World champion Wilson, who missed yesterday’s quarter-final win against Hungary after tweaking his back in the warm-up, was back today and reunited with McKibbin in the doubles. They made a great start, taking the first game against the men’s class 8 singles gold and bronze medallists Zhao Shuai and Peng Weinan 11-6, and at 10-8 had their chances to take a 2-0 lead but the Chinese pair edged it 12-10 to level.

The momentum then swung China’s way and although it came down to just one or two points in the third and fourth games Zhao and Peng took them both 11-8 to win the doubles 3-1 and take a 1-0 lead.

The first singles was a rematch of the 2018 World Championship final in which Wilson so memorably beat Zhao in five sets. The Chinese world No 2 won his third consecutive Paralympic singles title in Tokyo whereas Wilson has struggled with a knee injury in the last few months. However, the 26-year-old from Minster played a superb match, fighting back bravely after dropping the first game 11-5 to take the next two 11-8, 11-9.

He fought back again in the fourth, from 7-4 down to level at 8-8 before Zhao finally secured the game 12-10 to take the match into a decider. The fifth was nip and tuck all the way and Wilson saved a match point at 10-9 down but Zhao took the game 12-10 and the match 3-2 to take China into tomorrow’s final.

“It was a great match,” said Wilson. “We have had some crazy matches over the years and it was great to be a part of this one today. I wish the outcome could have been the opposite way and I could have kept us in the team event a little bit longer, but it is just one of those things. To share this moment with the boys is a special feeling and I really did enjoy every second of that. Win or lose sometimes you’ve just got to enjoy the whole journey and that is what I did.

“I am just so proud to actually be here and to represent ParalympicsGB again at my third Games. It is such a special thing and sometimes you take it for granted and with this one I really haven’t. I have appreciated all the support from everyone and all of the moments that I’ve gained from this Games. I’ll be taking away some amazing memories with me and I’ve enjoyed all of it.”

Like Wilson, McKibbin was winning his third Paralympic medal having taken bronze in the men’s class 6-8 team event in London and Rio.

“I think to be fair we played a really good match in the doubles and I’m very proud of our performance,” he said. “China is obviously a very strong team and if we could have nicked that second set it could have changed the match but there is not much to regret, to be honest.

“To say at London 2012 I’d be a three-time Paralympic medallist I probably wouldn’t have thought that would happen so it is obviously a very proud moment. It is a bit raw at the moment to not be in that final, which is what we were aiming for when we came here, but we’ve got to be proud of that – for me and Ross to be three-time medallists and Billy to have his first one.

“We have got such a strong unit as a team and we’re only going to get better so hopefully we can do even better in Paris.”

Although Shilton didn’t play today he played a massive part in the quarter-final win against Hungary yesterday and has shown his huge potential at his first Paralympic Games.

“I’m really happy with how I’ve performed in singles and team events,” he said. “My expectations were to come and try and enjoy the experience and play the best I could. I wasn’t aiming to do anything – just take every match as it comes and to come away with a medal with Aaron and Ross is an amazing feeling.

“Losing in the quarter-finals and being one match away from a medal in the singles was really hard for me to take and I think I can use that as motivation. I can also use winning bronze in the team event as motivation to get to the final next time.”

The final word went to McKibbin, who said: “I’d just like to say a big thanks to everyone who has been involved with us in the last 18 months. We’ve all had quite a tough year and the staff and everyone at the EIS and UK Sport that has been involved and helped us have been amazing.

“Huge thanks to the coaches – I don’t think we take enough time to say thank you to them. It has been a hard 18 months and they have done everything they can to get us to the best point possible and they deserve thanks from all of us.”