This wonderful photo shows two of the most eminent characters in the history of English table tennis in action on the table. 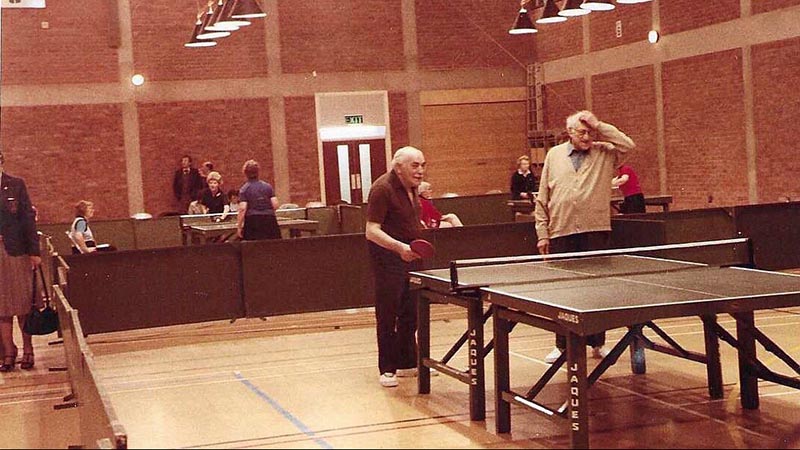 This wonderful photo shows two of the most eminent characters in the history of English table tennis in action on the table.

Maurice Goldstein, left, and Ivor Montagu between them have a century of service in the sport at home and abroad. Montagu was the founding father of the English Table Tennis Association and Chairman for three spells, as well as being the first Chairman and later President of the International Table Tennis Federation. Goldstein, meanwhile, among his many positions of responsibility, was ETTA President for 15 years.

The photo is from the personal collection of Maurice Goldstein’s youngest son Bernard, who says: “I am not sure where or when this was taken but I treasure it as the only photo I have of dad in action.”

In the latest of our series of Centenary Stories, we speak to Bernard’s older brother Rabbi Andrew Goldstein, who tells us about his memories of these and other notable figures in our sport.

When you grow up with a father who is known as ‘Mr Table Tennis’, there are bound to be a few stories to tell – but the time you got to play against a world champion in your own home takes some beating.

The world champion in question was Richard Bergmann, who was one of a string of notable visitors over the years to the Birmingham home of Maurice Goldstein and his family.

To anyone associated with table tennis in England from before the Second World War up to the late 1980s, the name of Maurice Goldstein will be well known. He became involved in the 1920s and in 1931 became secretary of the Birmingham Association seeing it grow to 250 clubs, the largest in the country.

He was ETTA President from 1973 to 1988, but as early as 1963 was said to have organised more tournaments and international matches than any other single person is likely to do – and he kept on doing that for another 25 years.

His finest hour was perhaps delivering the 1977 World Championships in Birmingham and resulted in him being awarded the OBE the following year. He also held numerous local and regional positions as well as his national roles.

He had three sons and the middle of them, Rabbi Andrew Goldstein, in particular inherited his love of the sport.

This meant he got to meet most of the top players of the day, including multiple world championship medallists such as Bergmann, Adrian Haydon and his daughter Ann Haydon (better known as Wimbledon champion Ann Jones), and the leading administrators of the era such as iconic ETTA founding father and later Chairman and President, Ivor Montagu.

Andrew said: “I got involved in helping at tournaments and went with dad to training sessions at Lilleshall. I have a photo of me there with Ann Haydon, as she was.

“Of course, dad was very close to Adrian Haydon and to Ivor Montagu and the rest of that generation. He and Ivor Montagu were great pals.

“I don’t know how old I was but Richard Bergmann was in our house and dad asked him to play me. I think he let me win a point!

“In my early teens, when people like Victor Barna and Richard Bergmann turned up in my house, you knew it was something special.”

That house at 415 Moseley Road in Birmingham was something of a nerve-centre for table tennis in the Midlands and further afield, and Andrew recalls a stream of meetings and matches being held there.

He said: “Immediately after the war, we lived in a big house in Birmingham. My father was a tailor and on the ground floor there was a large shop selling gentlemen’s clothes. Behind that was the workshop where the clothes were manufactured, and my father employed around six people.

“On the first floor was our living accommodation and on the top floor was the table tennis office for the Midlands and Birmingham Leagues and there was a constant flow of people for meetings. All the administration and committee meetings were held there throughout my youth.

“The first floor also had the table tennis room set aside just for table tennis and when I was about 10 or 11, we set up a family team in which myself, Bernard, our mother Gladys and our father played.

“We were in one of the Birmingham leagues and a lot of the time, dad would be in a meeting upstairs and we would have to call him when it was his turn to play.

“My mother was the sandwich maker for all the meetings, but also accompanied dad around the country. She was very much involved, not just in Birmingham but in ETTA circles. I also remember she went to the World Championships in Stockholm.

“Before the war, Dad travelled with the England team to Prague for the World Championships, which he also played in. I’ve got his passport and he travelled through Germany, so there is a Nazi stamp in it. It says he was a journalist, rather than a tailor or a table tennis player.

“I think I was aware of how respected dad was. He was known as ‘Mr Table Tennis’ and there were several profiles of him in the local paper. He was also a regular correspondent for the Birmingham papers, writing a weekly article.

“Obviously, I knew he was important when he got his OBE and I went to the Palace with the family when he received it. As a rabbi I led his funeral and there were a lot of people there from the table tennis community and Sport England.”

The oldest of Maurice Goldstein’s sons, David, also played – and still does – in the Birmingham area, while the youngest, Bernard, did not continue in the sport after childhood.

Bernard said: “I also have memories of being coached at 415 Moseley Road by Bergmann, the Haydons and the Japanese national team at a time when they were world champions.

“Unlike my brothers, I gave up the sport after I was beaten in the final of the Midlands group Eagle comic competition.

“I did continue helping the office with printing off papers on the Gestetner machine, stuffing envelopes and sticking on postage stamps. I also used to help check in players for the competitions held in Birmingham, the Midlands and Warwickshire Associations.”

Andrew Goldstein, who before retirement was Rabbi at the Northwood and Pinner Liberal Synagogue, has been the more involved in the sport and has played in the Harrow & Wembley League for more than 40 years.

“I’ve been playing for most of my life,” said Andrew, “I played a couple of games for Warwickshire as a junior but I never went any higher. Someone once told me dad wouldn’t select me because it looked like favouritism, but I think probably it was that I just wasn’t good enough.

“But I was obviously ‘infected’ by something from my father – although the highest I’ve ever got is Division 4 in the Wembley & Harrow League, I am the match arranger for the Vagabonds club (in Pinner) and the one who opens up for practice.”

Do you have a Centenary Story to tell? Contact [email protected]