Carey and Drinkhall still on Olympic trail despite defeats

Charlotte Carey and Paul Drinkhall have missed their first chance of qualifying for the Tokyo Olympics via the European Singles Qualification Tournament – Carey in heartbreaking fashion after missing five match points in her first-stage quarter-final. 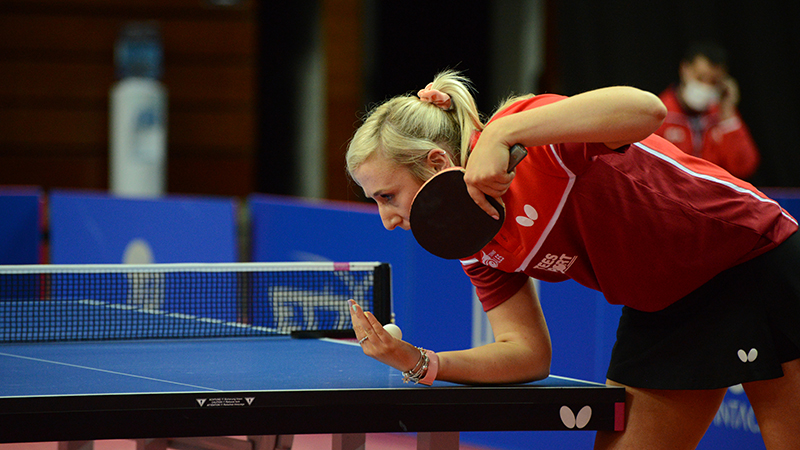 Charlotte Carey and Paul Drinkhall have missed their first chance of qualifying for the Tokyo Olympics via the European Singles Qualification Tournament – Carey in heartbreaking fashion after missing five match points in her first-stage quarter-final.

The good news is both, along with GB colleague Sam Walker, have another chance in the second stage beginning on Saturday.

Carey, ranked 151 in the world, has been playing some of her best table tennis at this event and she fought back from 3-1 down against world No 63 Jieni Shao of Portugal to force a decider.

When she pulled away from 6-6 to lead 10-6, it looked as if she would enjoy a momentous victory against an opponent ranked 88 places above her – and move to within one win of claiming a place at the Olympics.

Carey played the match points with no inhibitions, missing a couple by a whisker, but all four went by the board. But she engineered a fifth point in a stunning, high-tempo 47-shot rally at 10-10 and again stood on the threshold. That one was missed as Carey could not deal with a powerful backhand and drifted long.

The game then ended in unfortunate circumstances as Carey claimed for a slight flick off Shao’s shirt at 11-11, not seen by the umpires, and it was all over next point as she caught the net and went long, ending a pulsating match which lasted more than 63 minutes.

The result should not detract from a positive and high-energy performance and Carey’s task is now to bounce back for tomorrow’s second knockout stage, in which both finalists will secure a place at Tokyo.

GB coach Alan Cooke said: “She’s gutted now, but it was an awesome game of table tennis, she left nothing out there. She’s played some of her best table tennis here and is living with players ranked in that 50-100 bracket – she can bounce back tomorrow.”

Earlier, Welsh No 1 Carey overcame Katarina Strazar of Slovenia in another battle of the left-handers, taking it in four close games against the world No 303.

Coming back from 9-6 down to win the second was crucial and once Carey had saved a game point in the third, taking it 12-10, her opponent had too much to do.

Drinkhall’s defeat to the Spanish world No 63 Alvaro Robles was by contrast much less dramatic as he went down in five – Drinkhall took the third to raise hopes of a comeback but Robles never allowed him to get a further foothold.

Drinkhall earlier had a tight five-setter against Poland’s Jakub Dyjas, ranked 65, and prevailed in five as he fought back from losing the first game.

In the next stage, Carey is in action at 6.15pm on Saturday on Table 4 against Polina Trifonova of Bulgaria.

In the men’s draw, Walker faces Mihai Bobocica of Italy at 4.40pm on Table 2. Drinkhall has a bye in the first round and faces Aleksandr Khanin of Belarus in the second round at 8.45pm on Table 1.

Matches will be streamed live on ETTU TV.