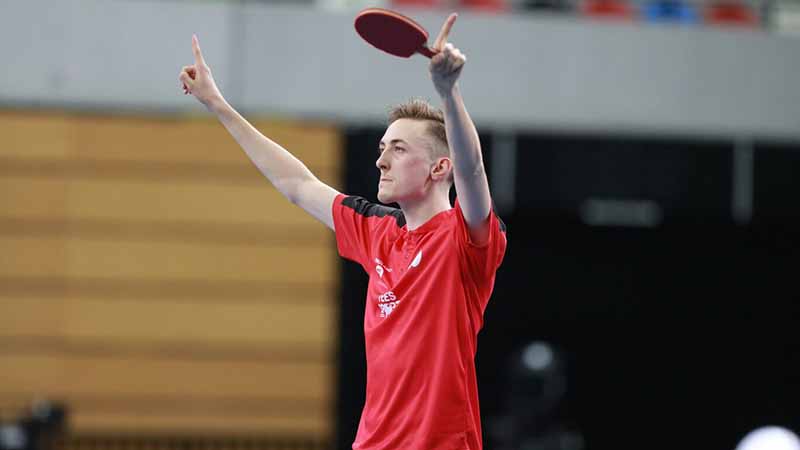 Liam Pitchford put in another superb performance as he saved five match points on his way to victory over China’s Xue Fei at the Qatar Open.

There was no time for him to celebrate winning the men’s singles at the PG Mutual National Championships on Sunday as he, Paul Drinkhall, Sam Walker and David McBeath were straight on a plane to Doha.

And it was into the action in the qualifying groups of the ITTF World Tour Platinum event this morning against an opponent who, although ranked No 153 in the world, became World Junior Champion in December.

The first five games were shared, leaving Xue 3-2 in front, and the Chinese took a 10-8 lead in the sixth to stand on the verge of victory.

Pitchford saved those match points, plus two more at 13-12 and 14-13, but he missed six game points of his own before finally levelling the match at 20-18.

The decider was again close, Pitchford closing from 6-9 to 9-9, but then having to defend another match point at 9-10. Again, he prevailed, and he took the next two points to seal it on his own first match point.

Had it all under control 😅

Pitchford said his close battle against World No 2 Fan Zhendong during the Team World Cup had given him belief, adding: “I’m playing well, I’m enjoying playing.

“I feel I have chances at a very high level. My backhand is my strong point but now overall I am being more aggressive, blocking the ball faster, not so passive.

“I feel a good level of consistency, it is the same in the gym and mentally I feel I can come back. Today I was 6-9 down in the seventh, back to 9-all, then down 9-10 before I won.”

And in a quirk of the draw, Drinkhall and McBeath were thrown together in the same group – Drinkhall winning in six to avenge his defeat to McBeath in the quarter-finals of the Nationals.

Abdel-Kader Salifou of France, ranked No 137, then inflicted defeat on McBeath in his second group match. Drinkhall plays Salifou tomorrow.