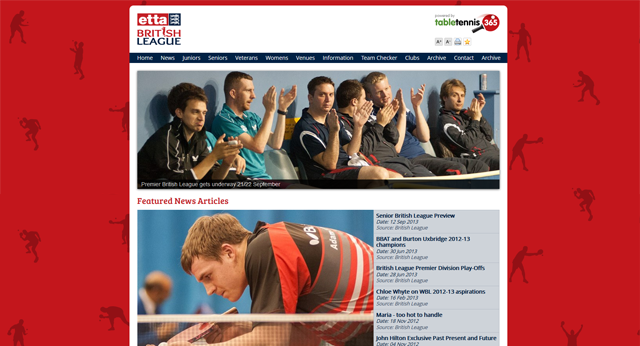 On the eve of the new Premier British League season, the ETTA has unveiled a new website powered by the popular Table Tennis 365 platform, which will kick-start a new era of British League.

The new website, which can be found here, offers a fresh, modern home for all things British League. The site brings together all competition formats, Senior, Junior, Women and Veteran, rather than four separate sites, whilst also featuring much more visual components, making the site appealing on the eye. The results engine has also been upgraded by the software developers Table Tennis 365 and now offers even more detailed player and team statistics, as well as a much faster administration interface for inputting results; meaning players get an even faster service than last season.

British League chairman Chris Dangerfield said “Over the last year we have made great strides in progressing British League. Earlier this year we held an open invitiation seminar and gained a unique insight into what players, clubs and spectators want in future years. We have already put some of these changes into action this season with more to come over the next few years.

On the court competition this season is as good as ever which is great to see, whilst off the table we have brought together a Press and Publicity Team that is delivering high quality content fast, recruited new blood to the committee in the form of Ryan Jenkins and Jason Ramage who will ensure player and club views are heard and this new website is yet another major step in the right direction for the future of British League. The future looks bright…”