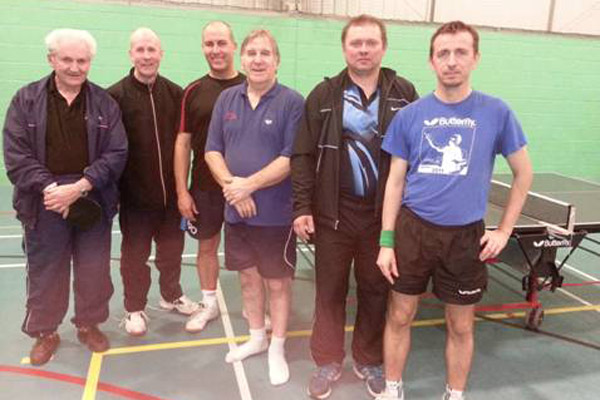 Bridgnorth Table Tennis Club captured the Shropshire Inter town trophy for only the second time with a series of outstanding performances at Shrewsbury on Sunday December 1st.

A surprise opening 9-6 win against red-hot favourites Telford in the first round started the run as experienced county veteran Mike Dudley and new team mate Boguslaw Oken cruised to a 4-1 victory on table one.

Telford hit back with a 3-2 win on table two as Mel Mitchell and Terry Ridgway were beaten in a tight game by Keith Pritchard and Ralph Humphries but the scores were reversed on the third table as Graham Phillips and Darius Sienko triumphed in a tricky tussle with Steve Crowson and Andy Hill.

Second match with an understrength Shrewsbury side ended in an 11-4 win for the town side, this time a maximum for Dudley, Oken, Ridgway and Phillips set up the deciding series of matches, Bridgnorth were looking for a big victory to add to their points total and could only be caught if Telford beat Shrewsbury by a whitewash scoreline.

Oswestry fielded a highly experienced side with Brian Rainford, Jim Reeves and Gerry Owen in their line-up and Bridgnorth were forced to raise the standard on every table. Once again Dudley and Orslow were on terrific attacking form backed by another unbeaten show on table two by the Ridgway and Mitchell combination and a 4-1 win for Phiilips and Silenko to wrap up a 12-3 victory.

With three wins in the bag the Bridgnorth team had to sit and wait for the winning confirmation as game after game on the Telford v Shrewsbury match went to the Telford side.

A single Rob Mansfield victory for Shrewsbury put the match score at 14-1 just a single game away from a required Telford whitewash and share of the spoils with Bridgnorth.