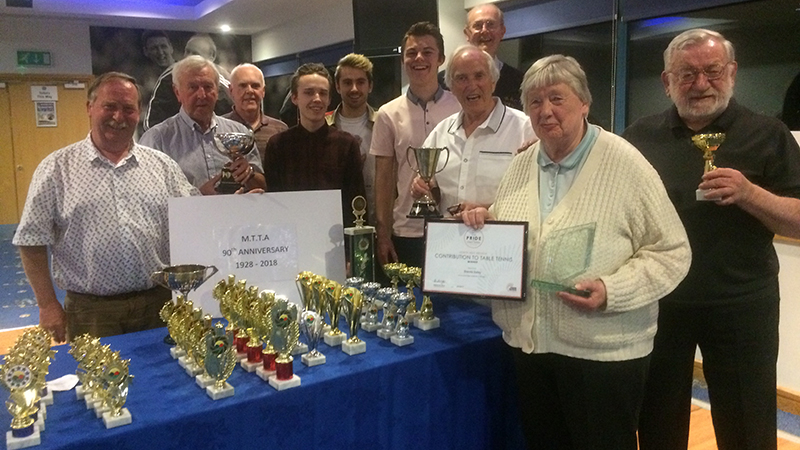 Super-volunteer Brenda Bailey has been presented with her Contribution to Table Tennis Award.

Brenda has been a volunteer official for Macclesfield Table Tennis Association for more than 50 years. She is currently the Chairperson and still very active, compiling league fixtures at the start of each season and updating league tables and individual player averages.

Her years of dedicated service saw her named winner of the Contribution to Table Tennis Award for both the North West region and also at national level. The award is part of our Pride of Table Tennis programme which honours volunteers in all areas of the sport.

Don’t forget, you can now nominate your unsung heroes for one of this year’s Pride of Table Tennis Award – click here for more information and to make a nomination.

Brenda was unable to attend the presentation ceremony during the PG Mutual National Championships, and therefore formally received the award at the Macclesfield League annual presentations evening recently.

She was also delighted to receive a phone call from Table Tennis England Chairman Sandra Deaton to thank her personally, and also said she was grateful to Karen Tonge MBE, who nominated her for the Regional Award.

As this year is the 90th anniversary of table tennis in Macclesfield, the Association had a display of archive photos at the presentations evening.

One interesting fact which came to light during their research is that an exhibition match involving four world-class players was held in Macclesfield in February 1939, shortly before the start of the Second World War.

The players were G V Barna (Hungary), L Bellak (Hungary), B Vana (Czechoslovakia) and R Bergmann (Austria) – who can be seen in the picture below.