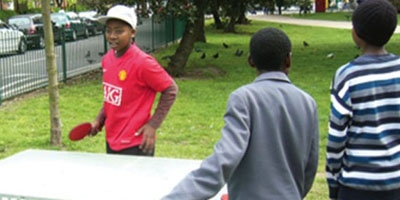 Getting people active, breaking down barriers and reducing conflict

Rosemary Gardens in Islington used to be a pleasant park area with provisions of football pitches, tennis courts and locations for children’s play. However, as with many urban locations in the modern era it became dominated by young gangs making this ‘leisure facility’ into an unpleasant area for the park’s staff to work.

That was before the introduction of four concrete outdoor table tennis tables though.

Their arrival soon brought the youngsters and the park keepers together, starting conversations, understanding each other better and breaking down the barriers that had built up between the two factions.

“Loaning out the table tennis bats helps to break down barriers between park staff and park users particularly with some of the youth gangs who can be intimidating at times,” said Park Keeper Richard.

He added: “When they come to the park office we get to talk to them and this can help to build respect and reduce conflict.”

Well located, next to the tennis courts, adjacent to high-rise housing and a primary school, the tables are proving popular with locals.

“It’s early days, but so far the outdoor table tennis has been a great success,” beamed Noel Headen, Leisure Manager for the London Borough of Islington. He explained: “It’s easy to provide and unusually offers an activity for all ages that isn’t normally available.”

The tables are free to play on as part of Sport England and the English Table Tennis Association’s (ETTA) strategy to introduce the sport and raise its public profile to more people as a fun, easy to play and healthy activity.

Karen Keech, National Development Network Manager at the ETTA, said: “We are quickly proving that where there is access to tables, bats and balls, there are no barriers and people play; it’s really as simple as that!”

If you feel the urge to pick up a bat and play then find an outdoor table near you across London! 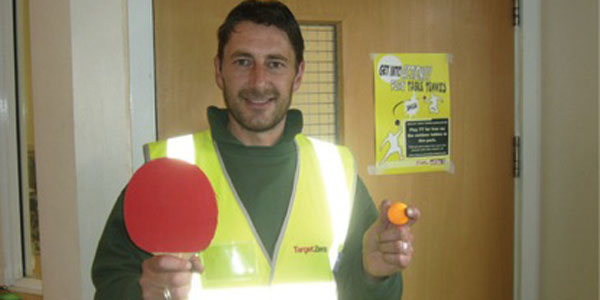