Lucie Bouron added a team silver in women’s class 1-4 to the silver medal she won in the women’s class 1-3 singles and Billy Shilton (men’s class 8) and Martin Perry (men’s class 6) took bronze medals in their respective team events on the final day of the Spanish Open in Almeria. 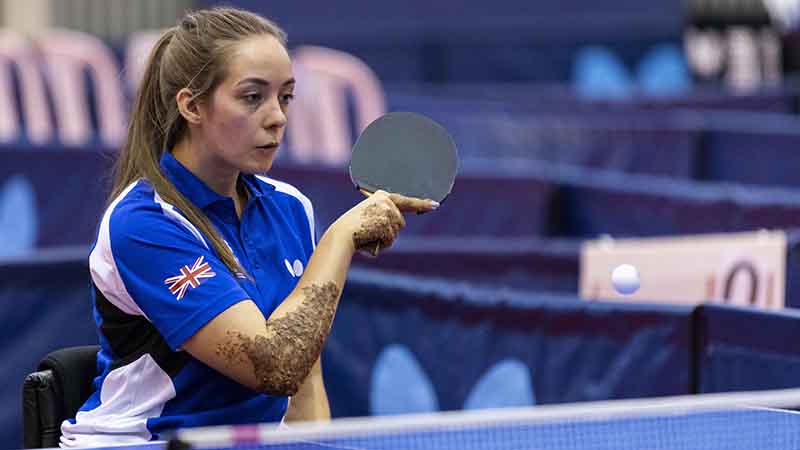 Lucie Bouron added a team silver in women’s class 1-4 to the silver medal she won in the women’s class 1-3 singles and Billy Shilton (men’s class 8) and Martin Perry (men’s class 6) took bronze medals in their respective team events on the final day of the Spanish Open in Almeria.

Bouron and her Japanese team partner Yukima Chada lost their opening round-robin match to Columbia/France 2-1, with Chada losing to Manuela Guapi Guzman from Colombia and Bouron to Monique Sirgand from France after winning the doubles.

They won their second tie against Finland 2-0 and in their final match against Russia/Spain they combined really well in the doubles to beat class 4 players Aleksandra Vasileva and Cristina Rubio 11-9 in the fifth. Chada lost another very close match 3-2 to Vasileva before Bouron clinched the tie with a 3-1 win against Rubio.

With three teams level on points the medals were decided on countback with Russia/Spain taking the gold and Bouron and Chada the silver.

“I’m really pleased to come away with two silver medals at my first Factor 40 tournament,” said 23-year-old Bouron, from Bracknell. “It has been a good opportunity to implement some things I’ve been working on in training and also highlighted other areas I need to improve to enable me to take my game to the next level.”

Click here to read the report from the singles competitions

After a 2-0 loss to Poland in their opening match, Perry and his Israeli team partner Asaf Gofer defeated Sweden 2-1, Perry clinching the tie with a 3-0 win against Peter Molander. The 24-year-old from Paisley won his singles against David Cucaita Vargas 3-0 to win the tie against Columbia/Kazakhstan for his team 2-0 and take them into a semi-final against Matias Pino Lorca from Chile and Esteban Herrault from France.

After losing the doubles 3-1, Perry put up a great performance to come back from 2-1 down to beat world No 11 Pino Lorca 3-2 but a 3-1 win for Herrault over Gofer in the deciding singles meant that the British/Israeli partnership had to be content with bronze.

“I was quite disappointed with my performance in the singles event,” said Perry. “I knew it would be a tough match against Seoane in the quarter-finals – I had chances to take the first two sets but I didn’t capitalise on those moments although I was happy with my application.

“In the team event I backed myself against Pino Lorca and prepared very well for the match. It was a close match from the start and I’m really happy with the energy and ability I showed. He’s been to the Paralympics and the World Championships so it was great to get the win over such an experienced player.

“Another win against a top 12 player is a fantastic way to end the season and I’m really pleased with the bronze medal in the team event.”

Shilton and the very experienced Ledoux came through their group undefeated after beating Netherlands 2-0, Japan 2-0 and Algeria 2-0. That took them through to a quarter-final against the Spanish/German combination of Ricard Sabio Ruiz and Karl Witzgall and after combining to win the doubles Ledoux won the first singles against Witzgall 3-0.

In the semi-final against Paralympic champions Ukraine, Shilton and Ledoux lost the doubles to Viktor Didukh and Ivan Mai 3-0 and Shilton lost 3-0 (8/8/8) to world No 1 Didukh.

“I think overall the tournament went well and of course it is great to take a medal,” said the 20-year-old from Stonehouse. “I feel that our doubles was also good considering we have never played together before.

“In the semi-final against Ukraine we always knew it would be difficult as they are one of the best teams in the world. Against the best teams and players you must take the chances you create and unfortunately we didn’t today. But on the whole it was a very positive team event.”

Dan Bullen and David Gabriel from Israel started men’s class 4-5 team with a 2-0 loss to Indonesia but progressed from their group after a 2-1 win over Norway/USA, Bullen securing the tie with a 3-0 win against the American Edward Schneider.

In the quarter-final against Netherlands they lost the doubles 3-1 and Bullen was beaten in the first singles match by Gerardus Van Grunsven 3-0.

Alex Bland and Norway’s Markus Koteng defeated Japan/Colombia 2-0 with Bland winning the first singles against Kazuya Kaneko 3-0. A hard-fought 3-2 win by Bland over Vladimir Anikanov was not enough to prevent a 2-1 loss to Russia/Ukraine and although Bland and Koteng won the doubles against Maksym Chudzicki and Wojciech Wlazlo, the Polish team won both singles to win the tie 2-1 and knock the British/Norwegian partnership out of men’s class 7.

Josh Stacey and Shae Thakker lost their opening match in men’s class 10 to Indonesia 2-0 but a 2-0 victory against Spain 2 earned them a quarter-final against the first Spanish team of Jose Ruiz Reyes and Jorge Cardona. They put up a great performance to win the doubles 3-1 and although Stacey fought hard against the former European class 10 team champion Cardona, the Spaniard took the match 3-1 before Ruiz Reyes won the tie for Spain with a 3-0 win against Thakker.

Also in men’s class 10, Craig Allen and Alexandros Diakoumakos from Greece were beaten 2-1 by Spain and were knocked out after a 2-1 loss to Chile.

In the round-robin men’s class 1-2 event Marc Bonnar and Tim Bunte from Germany lost their matches against France, Russia and Spain 2-0 but fought back from 2-0 down to win the doubles against Tomasz Jakimczuk from Poland and Timo Natunen from Finland and Bunte then won the tie with a 3-0 win against Ibrahim Dardas from Jordan.