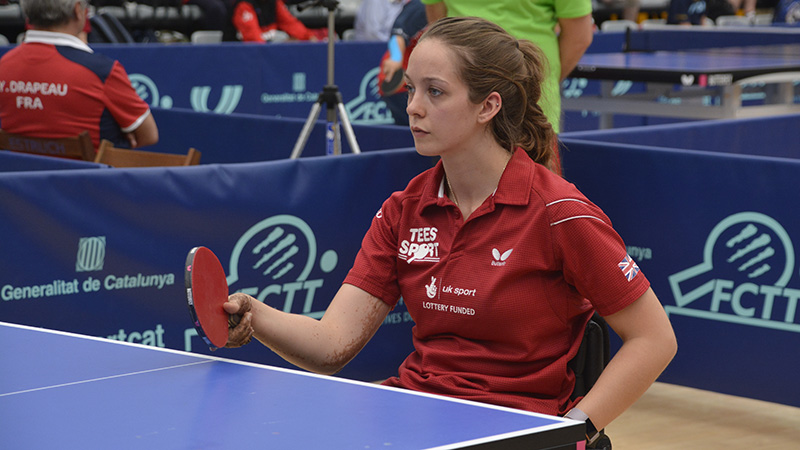 “Playing team with Tamara has been a great experience,” said Bouron, “and I’ve especially enjoyed being able to play athletes that I haven’t had the opportunity to in the past. I’m pleased with how I’ve performed out here and hope that I can take this forward into future tournaments.”

A 2-1 win in their final group match against British team mate Lee York and Hideaki Nagashima from Japan put them through to the semi-finals where they lost 2-1 to the Chilean partnership of Cristian Gonzalez Astete, the class 4 Pan-American champion, and Maximiliano Rodriguez Avila.

“It was great playing team with Cellan,” said Bullen. “I feel that we played really well in doubles and I have put in some good performances in the singles. I am pleased to get bronze – we both played really well in the semi-final but it was not to be this time. Overall I’ve had a good tournament with lots of positives.”

“I’m super-pleased that Dan and I made it out of our group and into the semi-final to obtain our first medal together as a team,” said Hall. “Through working together and supporting each other we managed to win tough matches. It has been a valuable experience that we can use and take forward to future competitions.”

York and Nagashima lost 2-0 to Thailand but finished third in the group with a 2-1 win against Mexico2.

They beat the Colombians David Cucaita Vargas and Cristian Laverde Ladino 2-0 and then beat the strong Chilean team of class 6 world No 10 Matias Pino Lorca, class 6 world No 9 Cristian Dettoni and Pan-American bronze medallist Ignacio Torres Orostica 2-0 to go through to the semi-final where they lost 2-0 to the top seeds from Thailand, former class 6 Paralympic champion Rungroj Thainiyom and class 7 world team silver medallist Chalermpong Punpoo.

“I’m really happy with that win against Inoue,” said Perry. “To play up a class and still win is a great confidence boost for the rest of the season. I’m happy to come home with two bronze medals.”

“Playing the team event with Martin was a first for us,” said Bland, “and to cap the tournament off with a bronze medal was a good achievement despite the fact that I have not played my best table tennis out here. I would like to thank Martin – it’s been a pleasure playing the team event with him, getting a good doubles win against Chile and for him personally getting a great win against Inoue.”

They lost 2-0 to the Asian Para Games team bronze medallist Takumi Shukunobe and US Open bronze medallist Hiromi Sato from Japan but secured the bronze medal with a 2-0 win against Costa Rica, Henry beating the class 8 singles gold medallist and Pan-American champion Steven Roman Chinchilla in the first singles match.

“I’m happy to win a bronze in the team event,” said Henry. “It’s been a good competition for me overall with some good wins in the singles and team events. I’m looking forward to working hard back home towards my next international competition.”

Allen and Abe, the class 9 2018 Copa Tango champion, lost 2-0 to the Chilean partnership of Manuel Echaveguren Farias and Gustavo Castro Serrano, who had taken gold and silver in the men’s class 10 singles yesterday, but went through to the semi-finals with a 2-0 win against Genaro Rojas Bernal and Enrique Preza from Mexico. They had to settle for the bronze after a 2-0 loss to the top seeds from Japan, class 9 World Championships bronze medallist Koyo Iwabuchi and Takuya Nakajima.

“I was pleased to get a bronze medal with Hayuma,” said Allen. “We played together in Spain earlier this year so we understood more about each other’s game. It’s a real privilege to represent Great Britain and I am grateful to all the coaches in the UK who help me to constantly improve.”

Noel Thomas and his class 3 partner Carlos Torres Araya from Chile were very unlucky to go out of men’s class 2-3 after beating the top seeds and Rio Paralympic team bronze medallists Yuttajak Glinbanchuen and Anurak Laowong from Thailand 2-0. A 2-0 loss to Alejandro Gomez Loaiza, the class 3 Youth Parapan Games champion in 2017, and Luis Valencia Henao, the class 3 Pan-American team bronze medallist, from Colombia, who were then beaten 2-0 by Thailand, meant that the group was decided on countback which left York and Torres Araya in third place.