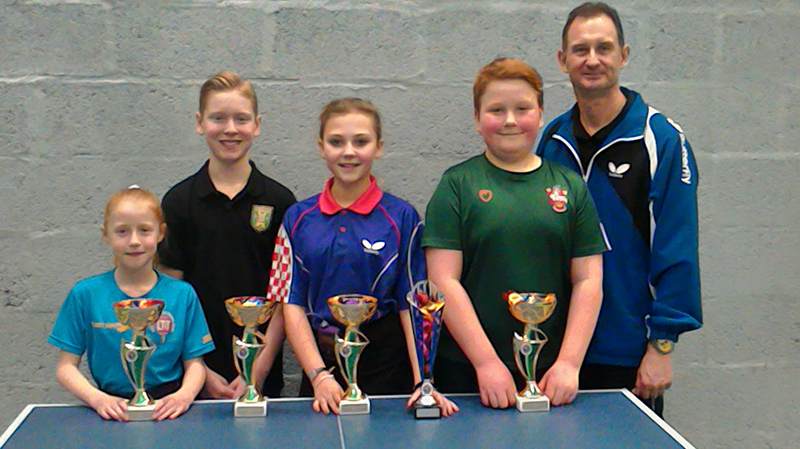 The U13 girls competed in a round-robin format with all five players coming from schools from Evesham. The competitors were Anna Cole of Blackminster, Bella Reid of St Egwin’s and Rebecca Arrandale, Sophie Arrandale and Emily Grove all from Bredon Hill Academy.

In a closely fought contest the championship depended on the result of the final match between Cole and Rebecca Arrandale. A win for Rebecca would result in a three-way tie with her sister Sophie and Cole all on three wins.

The two girls played some scintillating table tennis. Whilst Arrandale hit some terrific shots it was Cole’s overall consistency, which allowed her to secure a 3-1 win and remain undefeated.

The U13 boys only drew four competitors. Johnny Blakely of Blackminster School has been competing against adults in the Evesham & District League this season for his club side the Littleton Giants. He was far too experienced for his three opponents, winning all of his matches 3-0 to cruise to the title.

The U11 girls drew seven girls from Blackminster, Littleton and StEgwin’s. The girls were put into groups of three and four with the top two going through to the knockout stages.

The first semi-final pitched school friends Tallulah Brown versus Lara Hodgkins. After losing the first game Brown fought back to win 3-1 and go into the final. In the second semi-final Anna Blakely of Blackminster was too strong for Pippa Thomas, easing into the final with a 3-0 win.

Hodgkins beat Thomas 3-0 in the third-place play-off. In the final, Brown put in a tremendous effort, however, she was overpowered 3-0 by Blakely who emulated her older brother to win all of her matches by a 3-0 scoreline on the day.

The U11 boys drew 17 competitors from a broad selection of schools in Worcestershire.

The first semi-final pitched Alex Setchell of Meadow Green Primary (Wythall) against Alfie Saunders of Blackminster. In an exciting match Setchell’s stamina proved vital to win 11-4 in the deciding game and take the match 3-2.

In the second semi-final Ben Fellows of RGS Worcester had a comfortable 3-0 win against David Morrish of Burlish Park Primary (Stourport-on-Severn). Saunders beat Morrish 3-0 in the third-place play-off.

The final provided a titanic struggle between Fellows and Setchell, which enthralled the large number of spectators. In the best of five match, Setchell took a 2-1 lead and was ahead in the fourth game, only for Fellows to claw the game back to win 13-11 and tie the match.

Fellows was the beaten finalist last year and was in no mood to let the title slip from his grasp again. With both players putting in a brilliant display, Fellows secured the match with an 11-8 win in the deciding game.

Anna Cole’s super performance throughout the day earned her the trophy for Player of the Tournament.