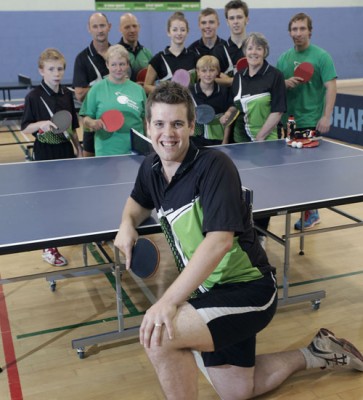 Bishop Auckland Table Tennis Club, based in Bishop Auckland, Durham, is celebrating after receiving a £300 donation from the MARS Milk Fund.

The club provides table tennis for more than 70 members and caters for all ages and abilities. They have been running for 12 months and have gone from strength to strength, now running four very popular sessions a week.

Matthew Porter, Club chairman, says: “The over 60’s meet once a week and love playing but the tables at the village hall are old and very tatty.

“With this donation from the MARS Milk Fund we can now buy a new table for our over 60’s and invite other clubs to come and play too.”

A recent survey conducted by MARS Milk revealed that despite seven out of ten of us starting the week with intention of spending at least two hours on our favourite sport or hobby, cost and tiredness invariably put paid to these plans.

The MARS Milk Fund was set up to help individuals, clubs and groups to try something new or simply to spend more time playing their favourite sport or hobby. The MARS Milk Fund, runs until October 6 2013 and has five £300 awards to donate each week.

The fund is open to residents of, and clubs and organisations based in the UK and Republic of Ireland only. Applicants must be 13 years or over and only one application will be accepted per person, club or organisation.