Ian Marshall of the ITTF honours Colin Clemett, who for 58 years was Secretary of the Technical Officials Committee, as he reaches his 90th birthday milestone. 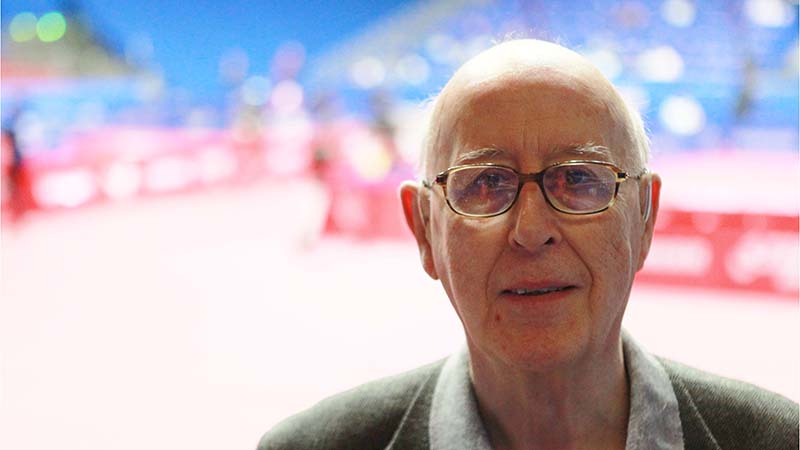 Need the voice of experience, need a reasoned decision or to check some intricate fact on the history of table tennis, there is one man who surpasses all.

The author of From London to London, the book to celebrate the staging of the 2012 Olympic Games, underlined the character of Colin Clemett; hours of painstaking research were undertaken; the result a publication was presented in a logical, detailed and clearly understandable manner.

Simply, he is a mine of information and in a similar vein, the man to whom you turn if an answer on a technical matter, or to be more accurate any other matter, is needed.

The concept of the “Lucky Loser” is now very much an accepted aspect of open international tournaments; it was not the situation when the first ITTF World Tour event was held in 1996 in Kettering, England. Following the group stage of play, there were vacancies in the main draw, the Referee was Richard Scruton, now Secretary-General of the European Table Tennis Union (ETTU); it was suggested that the places be filled by “Lucky Losers”. Richard thought for a moment and came up with the solution. “I’ll call Colin”. He did; the proposal was approved and very quietly, a new concept appeared on the international scene.

Colin Clemett is the supreme arbiter. A life member of Table Tennis England, he qualified as a County Umpire in 1952, later as a National Umpire in 1956, the ninth name on the list. In 1957 he joined the English Table Tennis Association’s Umpires Committee, now known as the Technical Officials Committee, becoming the Secretary in 1959. Significantly, you will find his name on the programme for the first ever English Closed Championships in 1958.

It is a position he held until retiring from office in October 2017; an unbroken stint of 58 years and no doubt well over 200 meetings! Retirement from office, I’m not so sure, to the best of my knowledge, he remains Chair of the Rules Committee for Table Tennis England.

Notably, he progressed to become a National Referee in 1971, the third on the list. Between 1961 and 1965 he was the Deputy Referee at English Open; in 1966 at the European Championships staged in London, he assumed the same role. Later in 1993, he was the Referee at the Indian Ocean Island Games in the Seychelles and in 1997 at the European Small States Games in Reykjavik.

Furthermore, he fulfilled the role of Technical Delegate at the Olympic Games in 1992, 1996 and 2000; also at the 1999 African Games and the 2002 Commonwealth Games in Manchester.

Meanwhile, for the International Table Tennis Federation, he was Secretary of the Rules Committee from 1969 to 1973 and Chair from 1973 to 2003. He was responsible for the introduction of the International Umpire and International Referee qualifications, editor of the Handbooks for Match Officials and Tournament Referees. In addition, he was the Technical Delegate at the 1992, 1996 and 2000 Olympic Games as well as at the 1999 African Games and the 2002 Commonwealth Games in Manchester.

Always voluntary, the contribution made by Colin Clemett to the sport of table tennis in a quiet, unobtrusive and ultra efficient manner is immense; it cannot be understated.

We raise our glasses: Happy New Year and Happy Birthday!