BBAT are champions of the British League 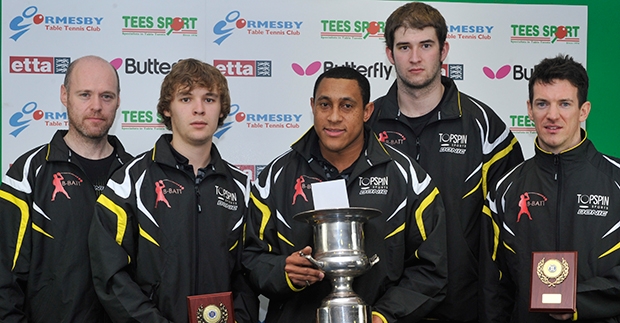 B-Batt Pavilion sealed a British League double after their 6-2 win over Fusion.

B-Batt knew victory would be enough to confirm the title after a dramatic Saturday ended with them having a three point cushion with two games remaining. Two wins each from Chris Doran and Niall Cameron alongside wins for Michael O’Driscoll and Giovanni Le Borgne secured the title to go alongside their Junior British League crown.

It ended a superb season for the club after an agonising end to last year’s campaign, having both British League titles snatched at the death.

Manager and co-founder of B-Batt, Jade Blasse, paid tribute to his side and dedicated the victory to friend and co-owner Eli Baraty.

“We’d like to dedicate today to Eli. He’s been hospitalised and it’s sad that he can’t be here today to enjoy the icing on the cake but we are delighted. Last year we were heartbroken. We were leading by one point but lost out on count back to Fusion, but we’ve won it and all the hard work has finally come through.”

“I think everybody knows the stupendous result Charlotte Carey got against Sean Cullen to get Kingfisher the draw which I don’t think anyone expected. A lot of credit has to go to Richard Andrews as well. He was outstanding yesterday when he won his first six matches. It was a very unexpected draw and I don’t think anyone saw Wymondham beating them either but it’s a great win for us.”

Doran also paid tribute to his side, ranking the victory as one of his career highlights in the process.

“I think everyone has played above themselves. Everyone has comfortably over 50 percent. I think I’m over 90 percent, as is Michael O’Driscoll, he’s dominating everyone and Niall and Giovanni have about 65 percent too, So even if one of us plays poorly or has a bad loss normally the others can chip in so it’s been great.”