Paralympic champion Will Bayley heads a 12-strong squad from the British Para Table Tennis Team that will compete in the Lignano Master Open in Italy this week – the first international tournament of the 2018 season. 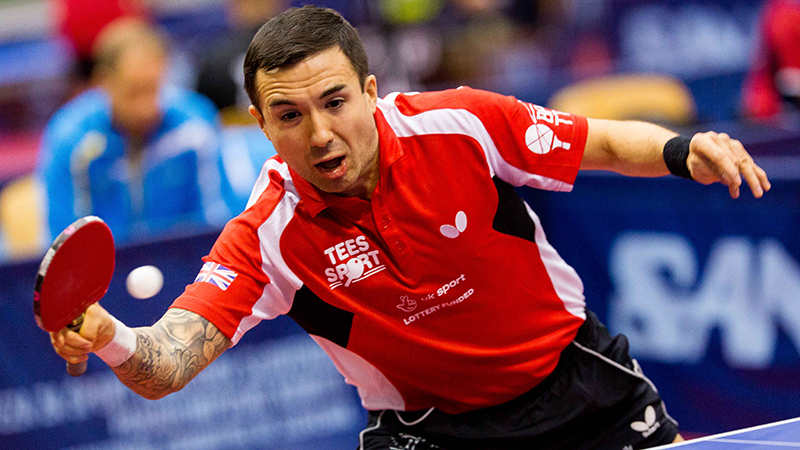 Paralympic champion Will Bayley heads a 12-strong squad from the British Para Table Tennis Team that will compete in the Lignano Master Open in Italy this week – the first international tournament of the 2018 season.

The Rotherham-based 30-year-old from Tunbridge Wells, who won gold in the men’s class 7 singles in Rio four years after taking silver in London, was runner-up to Aaron McKibbin in the Para men’s class 7-10 event at the English National Championships earlier this month and is focused on defending his world title later this year.

“Training is going well and I feel like I have improved a lot over the last few months,” said Bayley. “I’m looking forward to the international season getting under way.”

Kim Daybell (men’s class 10) and Ross Wilson (men’s class 8) will be hoping to show they are in good form before heading to the Gold Coast to represent Team England in the Commonwealth Games next month.

Daybell is in the final year of his medical degree at Leeds University and after taking his first major medal at the European Championships in 2017 is targeting further success this year at the Commonwealth Games and World Championships.

“I’m still carrying over the confidence from the Europeans,” said the 25-year-old from Sheffield, “and I’m very excited about this season. My aim is to take a medal at the Commonwealth Games and the World Championships and I’ll also be starting work as a doctor so I’m excited about the new challenges ahead.”

Wilson took bronze in the men’s class 8 singles at the Europeans, losing a very close semi-final 3-2 to the Ukrainian world No 1 Viktor Didukh.

“Training is going really well at the moment,” said the 22-year-old from Minster. “I have been able to make positive changes to my game throughout the winter and I feel confident in myself and can’t wait for the season to begin. Italy is always a tough competition and the first of the year so I am just going to go and give it my very best and see what happens.”

“I’ve had injury problems for the last two years,” said Wetherill, “but I feel really fit and strong and ready for Italy. I’ve changed a lot of things in my game since the Europeans so it feels like a new me coming in to this season.

“I feel that it is a better version but I’m not expecting things to go 100% smoothly all the time – all I can do is go out there and do my best. Italy is the first step on the ladder for this season so if it doesn’t go so well I’ve still got time to get better for when it really matters.”

Performance director Gorazd Vecko is hoping for good results after a hard winter’s training but is also looking for the team to peak at the World Championships in October.

“The first event of the year is always difficult to assess,” he said, “and whatever the results we will take the positives. Our main goal for this year is the World Championships and we are preparing the athletes to produce their best in October but they have been training hard and are ready to compete. Italy is always a strong competition and it will be good to see where we are compared to the rest of the world at this stage of the season.”