Bat & Chat ticks all the boxes for club and players

A Bat & Chat session in Bristol is proving ideal for supporting rehabilitation of illnesses, producing and supporting league players and encouraging social participation – and is even generating income for the club which runs it. 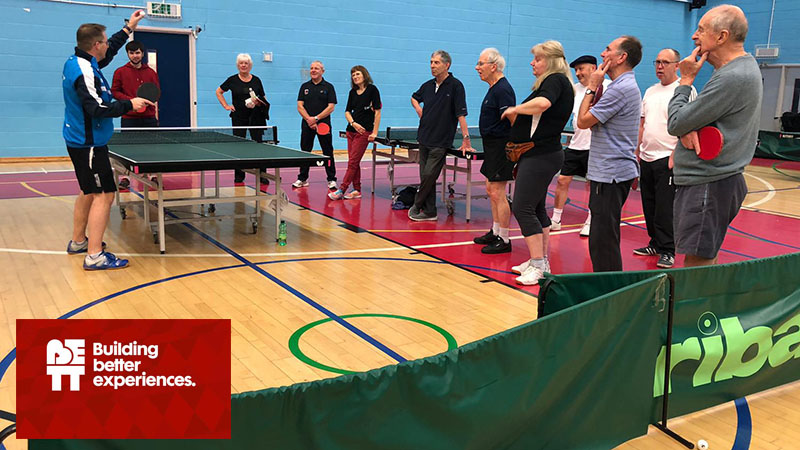 A Bat & Chat session in Bristol is proving ideal for supporting rehabilitation of illnesses, producing and supporting league players and encouraging social participation – and is even generating income for the club which runs it.

Coach Nick Davidson of Bristol Academy, which is part of the College, set up the session in September with help from Be TT funding and with Table Tennis England Development Officer support.

Since then, it has gone from strength to strength and is now self-funding, as well as generating income for the club to help support coach development and equipment replacement.

There have been 18 hour-and-a-half sessions since September and 22 players have signed up to attend on a regular basis.

When I attended the session last week I was welcomed into the session by a group of participants who accessed the opportunity for a whole host of reasons.

One participant, Anne, started the sessions after seeing a poster in her local church, where a table tennis table had been placed as part of TTE’s Loop in the Community programme. Her motivations for attending were for the quality coaching that Nick provides and the mixture of abilities of players that she gets to play against.

Another participant, Maria, came to the session having seen a poster in the Ping Pong Parlour in her local shopping centre. As a new participant to the game, she loves the variety of opportunities she has to access the game. She has started playing in a social session on a Tuesday evening as well as the Bat & Chat session, and she regularly plays in a leisure centre.

Gary told me he sees the sessions as a great opportunity to receive some coaching and to socialise at a session where there is no judgment about his ability and where his skills get stretched.

Catherine used to play a lot when she was younger and stopped when she had a family. Since returning to the game she has found she’s picked up a lot of bad habits and she is appreciating the opportunity to get some coaching, to play the game again, and to get fitter.

She told me that although the Government often tells people to be more active, she has found it quite hard to find that many local opportunities to go to, other than this session.

Having expected a lot of the participants to be attending due to the social aspect of the session, I was surprised to find that most of the players’ main motivation was actually to have some coaching. They all talked about how important it was that they had such a great coach, and how lucky they felt that he made it fun and enjoyable, but also stretched them physically and mentally every week.

They also enjoyed having a coffee or lunch together after the sessions (the college has a café on site), but their main reason to attend was to have an opportunity to access the game they love and to improve their game.

One player was just returning to play after having a stroke and was finding the game helped him hugely with his motor skills. Another had just come back to playing after being diagnosed with Parkinson’s disease. For these players the opportunity to play and be coached in a safe and relaxed environment was very important, and also to socialise. Many of the players have since started playing in the local Bristol League.

I can’t quite put into words how special this session feels for those participants who engage in it. Every single one of them came to talk to me during my visit and everyone spoke so passionately about how pleased they were to access such a great coach.

The sports hall was packed with 10 tables, all being used. Participants who sign up to these sessions come back week after week to engage in the opportunity. There really is something for everyone at this session, and I am enjoying watching it go from strength to strength.

The Table Tennis Academy has long been an integral part of the sporting environment at SGS College since its establishment as one of the original academies.

Over the years the Academy has consistently developed student athletes, from the ages 16 to 19, who are provided with the opportunity to combine their academic study from a wide range of courses at SGS College with up to 16 hours of top-level coaching every week under the tutelage of Level 3 Head Coach Nick Davidson.

Our team competes in the Association of College Games and has a proud tradition of competing for provincial and national honours. Our student athletes are provided with the opportunity to practice almost every day, with the primary squad training sessions timetabled for Mondays, Wednesdays and Fridays.

The facilities at SGS are state-of-the-art and academy students get personalised programmes to follow during their supervised strength and conditioning gym sessions in addition to the accessibility to full-time physiotherapists, who help with regard to injury avoidance and rehabilitation. There is also a sports psychologist to benefit the important mental aspect of the game.

Our Academy coaches are additionally supported by former England and Scotland National Team Coach and Commonwealth Games medalist, Kevin Satchell, who works as Head of Sector at SGS College. Our alumni include the current Paralympic champion Will Bayley.

The Table Tennis Academy also caters for recreational players looking to reach their maximum potential in a competitive and friendly team environment, while they pursue their educational course of the choice at SGS College.

The Table Tennis Academy also has a very strong connection with the local community, who regularly fill the sports hall at Wise Campus.

Why not visit us at www.sgscol.ac.uk to view and apply for our latest courses or contact Nick Davidson to discuss the table tennis academy