McTiernan brothers make it a family one-two in Basingstoke 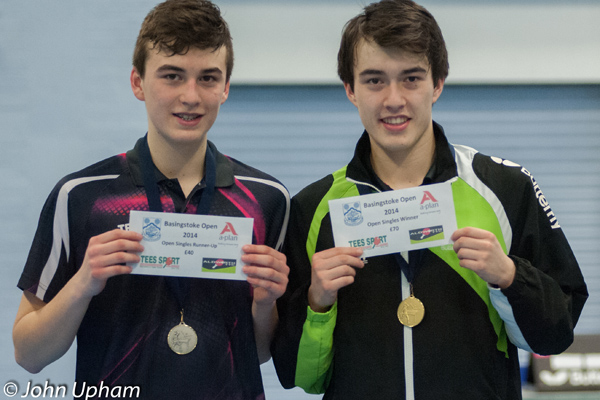 Reading’s Liam McTiernan became the new Basingstoke Open Singles Champion after the top seed dominated the event from start to finish, eventually defeating younger brother Daniel in the final. The England no. 27 was rarely troubled, dropping just one set on his way to the gold medal and £70 winners prize. Daniel, seeded number six, caused the upset of the tournament as he took out second seed Hari Gehlot in the quarter-finals but, despite a valiant effort, he was ultimately no match for his older brother in the final, going down in 3-0 but still taking home the silver medal and the £40 runners up prize. Watch the final here.

A total of 55 players from across Berkshire, Hampshire, Surrey and Dorset took part in the annual event, hosted by Aldworth Table Tennis Club and the Basingstoke Table Tennis Association. A total prize fund of £200 was on offer across the singles and doubles events thanks to sponsorship from A-Plan insurance.

Although the top eight seeds all made it to the quarter-finals of the singles, there were surprises in the final eight as three of the top four seeds bowed out a stage earlier than expected and missed out of the guaranteed £20 semi-finalist prizes. Number three seed Andrew Mudie of Aldershot was defeated 12-10 in the fifth by fellow Aldershot player Ross Saxby, the eighth seed who eventually fell to Liam McTiernan in the semis. Winchester’s Ed Slot, at number seven, took out Portsmouth fourth seed Martin Matuzevicius but went down in a four game semi-final to an in-form Daniel McTiernan. The consolation event, for players who didn’t make it through the group stage, was won by Winchester’s Morgan Smith as he defeated Eric Wong of Basingstoke 3-0 in the final.

There were plenty of upsets in the open doubles as Aldershot’s fourth seeds Andrew Mudie and Shaun Robertson put on a fantastic display in the latter stages of the tournament to take the title in an ultimately one-sided final against seventh seeds Zac Dowling and Norman Swift of Bournemouth.

Mudie and Robertson had a shaky start, having to come through a close five game match in the first round but improved as the afternoon went on. They produced a stunning display in taking out the number one pair of Liam McTiernan and Tony Reynolds in a thrilling semi-final which went the distance, eventually finishing 12-10 in the fifth set to the under dogs. 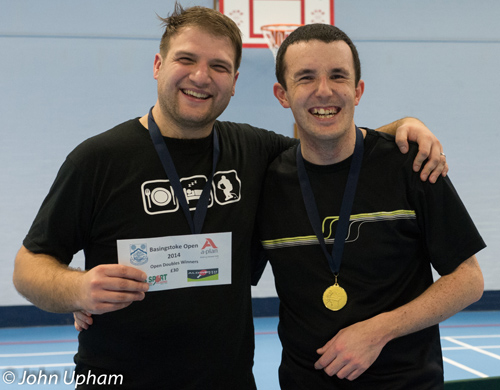 The second seeds Hari Gehlot and Mark Banks bowed out in the quarter-finals in a shock 3-0 loss to Portsmouth’s Billy Ho and Danny Lucking who also played their part in another marathon semi-final which went the way of Dowling and Swift 11-8 in the fifth game. The third seeds were also missing from the semi-finals as Daniel McTiernan and Ed Slot were defeated by the unseeded Julian Walton and Nick Webb whose great performance earned them a 3-0 win in the first round.