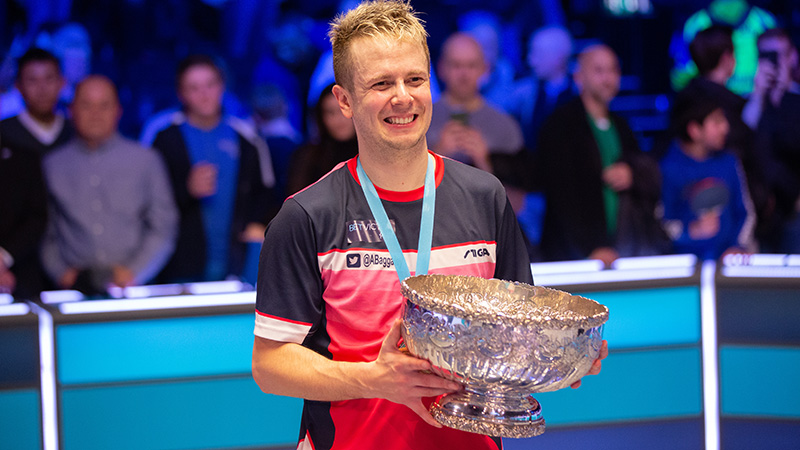 The competition is being held in a covid-secure bubble at the Ricoh Arena in Coventry and replaces the World Championships of Ping Pong, which would normally be held at Alexandra Palace this month.

In a video recorded on Zoom, which you can watch below, Baggaley, who won the WCPP for a record fourth time last year, says he is excited by the new tournament – and also reveals he was laid low by covid-19 around six months ago.

He also recalls the epic final last year, when he won the title by beating Germany’s Alexander Flemming on the last point of the match with the score locked at 2-2, 14-14.

Gavin Rumgay represents Scotland and Paul McCreery and Jason Sugrue are in the field for Ireland, while the competitors also include previous WCPP winner Maxim Shmryev from Russia and Flemming.

Also in the bubble will be Colin Wilson, who will be commentating on the event – coverage will be on Sky Sports Mix from noon on Saturday.

Wilson said those at the tournament are due to be covid-tested on Friday morning and – subject to a negative result – enter the bubble that evening. They will remain there until the end of the event on Sunday.

Colin said: “It seems they have hired the whole arena and hotel, so this comes under the elite sport banner like Premier League football.

“I imagine we’ll maintain distance even though we’ve all been tested, as it’s good practice.

“I’ll be sharing the commentary box with Tony West, who has actually just recovered from covid, so we’re probably as safe as anyone.”

He said the closed nature of the event actually made his job slightly easier than other years, adding: “I’ll have to plan fewer lines than usual – there are normally 64 players at the World Championships but there are only 24 this time and we’ve got to know most of them over the years.

“Other than that, I don’t think my life is going to be much different because most communication with Sky is done over headphones anyway and they don’t even have to be in the building.

“I think it’s about 55 hours in the bubble all told – we’ll just get on with it and then when it’s all over, I’ll hop in the car and go home. I’m very lucky that it’s less than an hour from my house.

“When you’re doing 16 hours of live commentary over the weekend, there’s not a lot of time for anything else other than research and sleep.”