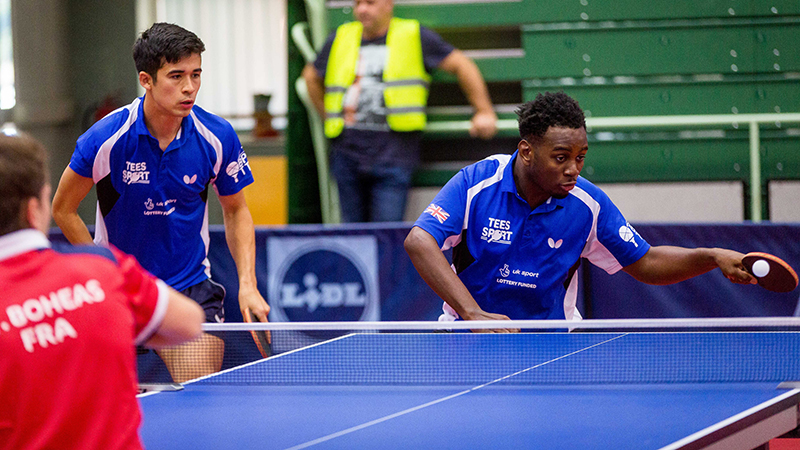 Facey Thompson lost the first set against Chao Ming Chee from Malaysia in his opening match but recovered to beat the Asian Youth Games gold medallist 3-1 and topped his group with 3-0 wins against the Brazilian PanAmerican champion Diego Moreira and Takuya Nakajima from Japan.

A 3-1 win in the quarter-finals against another Brazilian Lucas Dos Santos Carvalho and a 3-1 semi-final win against the top seed from Japan Koyo Iwabuchi took him through to the final but the 17-year-old Ukrainian Lev Kats proved just too strong and took the match 3-1 and the gold.

“I felt that I played solidly in the earlier rounds,” said the 23-year-old Sheffield based Londoner. “I tried my best in the final but I rushed a lot of points and got frustrated. I have a lot to work on when I get back in the training hall but I need to focus on the team event now and I’m looking forward to playing with Josh.”

Gilroy topped her group with 3-1 wins against Jelena Sisic from Croatia and the class 5 former world No 1 Pui Yi Wong from Hong Kong and went on to beat Zorica Popadic from Serbia in the quarter-finals 3-0. The semi-final against Nada Matic was a repeat of their bronze medal match in Rio 2016 and although Gilroy fought back to level at 1-1 it was the Serbian world No 5 who came out on top again with a 3-1 win.

“I played well overall,” said Gilroy, “but having not been back in training very long I’m still not back to my usual playing standard and am lacking match practice. I need to be sharper but I’m improving through the tournament.

“Bronze is a good start to the season as it is my first international event since last October and I’ve had fairly major surgery on my arm but it would be good to improve on this in Slovenia next week.”

A 3-1 quarter-final win against old rival Richard Csejtey from Slovakia took him through to a semi-final where he came up against the experienced Gyula Zborai in top form and the Hungarian former world No 2 took the match 3-1.

“I felt I played well to make the semi-finals,” said McKibbin. “I had an awkward win in the group against a new player from Thailand and followed up with a good performance to beat Csejtey in the quarter-final. In the semi I don’t feel I played bad; I struggled to finish the points when I was creating chances but to be fair Zborai played really well – maybe the best I’ve seen him play.

“I was disappointed to start the first set so slowly as in the next three sets I was always up and unlucky not to convert. I’m feeling good going into Slovenia next week but there are some things I still need to work on in the training hall for the World Championships later this year.”

Stacey recovered from losing the first set in his opening match to beat David Pulpan from the Czech Republic 3-1 and went through to the knockout stages as group winner after 3-0 wins against Nobuyuki Suzuki from Japan and Barnabas Retter from Hungary 3-0.

A 3-0 win in the quarter-finals against Moreira took him through to a semi-final against Kats and he pushed the eventual gold medallist all the way, leading 2-1 but eventually losing the match 11-8 in the fifth.

“I think I played well and I was pleased with my performance overall,” said the 18-year-old Welshman. “Kats played well in the latter stages of the match. I think I could have tried to dictate the game a little bit more but he was better than me today. Now I’m looking forward to playing the team event with Ash.”

Hunter-Spivey went through to the quarter-finals with a 3-1 win against the former European champion and world No 8 Nicolas Savant-Aira from France and 3-0 wins against Daniel Staszak from Poland and Milan Zelen from Serbia.

He looked to be heading for defeat in the quarter-finals against Hamza Caliskan after the Turkish world team silver medallist took the first two sets but the 22 year old from Liverpool battled his way back and took the next three sets 14, 14, 9 to go through to a semi-final against the top seed Mitar Palikuca which the Serbian world No 3 won 3-0.

In men’s class 6 David Wetherill started slowly against Tim Laue from Germany but after dropping the first set he took control of the match for a 3-1 win. Another 3-1 win against Vjekoslav Gregorovic from Croatia, the former World number one, earned him a bye into the quarter-finals where he was beaten 3-0 by the European bronze medallist from Croatia, Pavao Jozic.

In her opening match in women’s class 4-5 Megan Shackleton led Rio Paralympic bronze medallist Matic 2-1 but after edging the fourth set 16-14 the world No 5 from Serbia finally took the match 11-9 in the fifth. Shackleton then secured her quarter-final place with a 3-1 win against Tamara Leonelli Leonelli from Chile. The 18-year-old made a good start against Wijittra Jaion taking the first set 13-11 but the world No 10 from Thailand came back to take the match 3-1.

Billy Shilton battled hard to beat Takumi Shukunobe from Japan 3-2 and after a 3-1 loss to world No 4 and European silver medallist Ivan Mai from Ukraine he secured his place in the knockout stages of men’s class 8 with a 3-0 win against Joshua Wagner from Germany.

His reward was a quarter-final against the Ukrainian world champion and world No 1 Viktor Didukh and the 19-year-old was far from disgraced in a 3-1 defeat.

Martin Perry was unlucky to be drawn in a tough group in men’s class 6 and went out of the singles after 3-0 losses to world No 1 Alvaro Valera from Spain and the PanAmerican champion Matias Pino Lorca from Chile.

Fliss Pickard was also drawn in a tough group and went out of the women’s class 6 singles after 3-0 losses to the World number three and Paralympic bronze medallist Maryna Lytovchenko from Ukraine and the Korean world No 7 KunWoo Lee who went on to take gold and silver.

The tournament continues with the team events which conclude on Sunday.