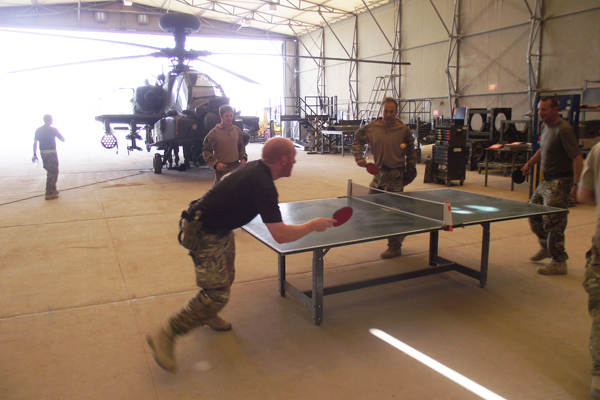 As if any further illustration was required, the RAF are displaying their own ‘Apache Ping Pong’ – taking the idea of table tennis as a sport for anyone, anywhere and at anytime to a new level!

Brian Slinn, Staff Sergeant for AH Det at Camp Bastion, said: “Thanks to the generosity of ETTA the troops are now able to hone their ping pong skills when they are not bending spanners on, or flying in, the Apache.

“As you can probably imagine playing in 40+ degree heat soon brings on a sweat! The extremely competitive nature of the lads also raises the temperature!”

The AH Det, made up of a combination of Technicians from The Royal Electrical and Mechanical Engineers (REME) and Aircrew/Groundcrew from the Army Air Corps (AAC), are normally based in Wattisham, Ipswich where table tennis is obviously a lot more easily available.

However, thanks to the donated Instant Ping Pong pack, the crew can continue to play while on duty in Afghanistan. It won’t just be the current staff in service to enjoy the pack though as the equipment will remain in place for the long-term.

Staff Sergeant Slinn explained: “The equipment will remain in Afghanistan for use by this detachment and many that will follow until the British Army’s final withdrawal from Afghanistan. Trust me it will get maximum use as it is a welcome relief from the rigours of daily life in Afghanistan!

“May the ‘Ping-Pong’ competitions begin!”