North Korea and South Korea will compete as a unified team at the ITTF World Team Championships semi-finals in Sweden. 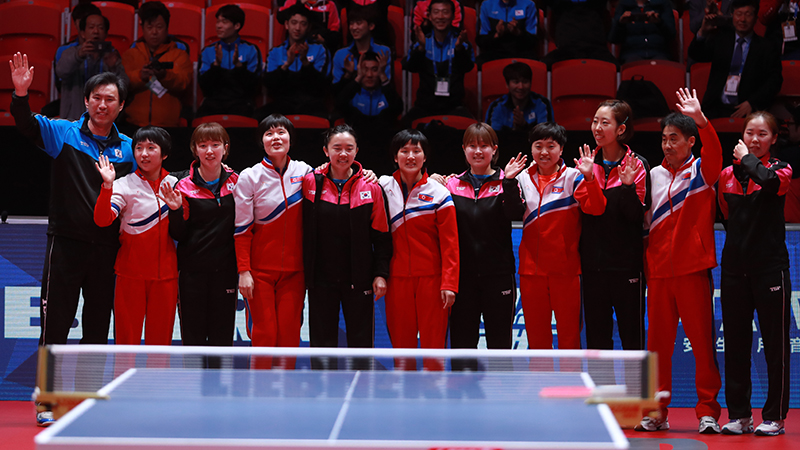 North Korea and South Korea will compete as a unified team at the ITTF World Team Championships semi-finals in Sweden.

The neighbours’ women’s teams had been due to meet in a quarter-final match today but, amid amazing scenes, told the umpires that they did not want to compete against each other when they walked into the court.

Instead, both teams requested that they want to form a unified Korean team to compete together in the semi-final, which will be held tommorrow against either Japan or Ukraine.

The decision for the unified team was a tripartite one between the leaders of the North and South Korean Table Tennis teams and the ITTF.

ITTF President Thomas Weikert, who was chairing the ITTF Board of Directors meeting at the time, stated: “When I informed the Board of Directors about this development, the unified team received a standing ovation from the delegates who showed their sign of support to this historic move.”

The move follows the North and South Korean leaders’ pledge for “lasting peace” to the Korean peninsula just last week.

President of the Table Tennis Association of the Democratic People’s Republic of Korea, JU Jong Chol, said: “This is the result of the strong support provided by the ITTF and IOC. We will do our best to get more successful results internationally in a joint effort between North and South Korea.”

Korea Table Tennis Association Vice President and IOC member RYU Seungmin added: “This is a big historical decision for both our countries. This is table tennis history so we are very happy. I would like to thank the ITTF for their strong support. This is an important statement to promote peace between our countries through table tennis.”

The last time that a Unified Korea team played the World Table Tennis Championships was 1991 in Chiba, Japa,n where they shocked defending champions China to be crowned world champions.

It has been a big year for the two Korean countries joining forces, after they made history by marching together in the 2018 Winter Olympic Games earlier in Pyongchang, which was the most significant sign of unity in international sport since the 1991 World Table Tennis Championships. It is thanks to the IOC that North Korea is participating in Halmstad, due to their Olympic Solidarity support.