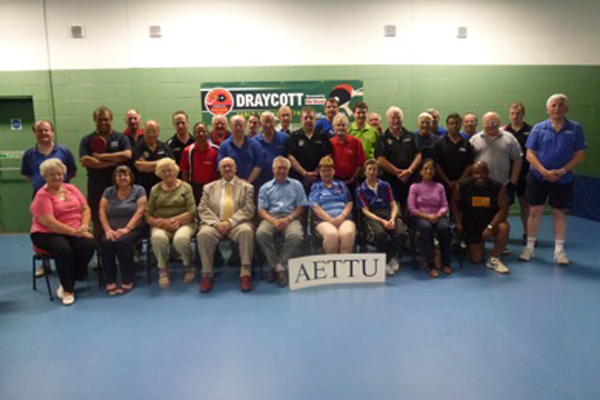 The 2013 competition for the Association of English Table Tennis Umpires (AETTU) took place at the Draycott and Long Eaton TTC over the weekend of 22-23rd June 2013.  This is the sixth year of the competition.  The standard of play continues to improve and each event is become more competitive.  This year there were 29 competitors and 37 players and guests sat down to the evening meal at the Hallmark Hotel in Derby.

A number of new umpires joined the AETTU competition for the first time and their standard of play was unknown. It was soon obvious that Mike White, a new young umpire from West Sussex, was a very good player and he proved this by beating the 2012 Open Champion, Dave Griffiths, after coming back from 0-2 to win the U50 event 3-2. Roy Claxton, one of the AETTU’s Associate members from Scotland, proved a difficult player with his pimpled rubber.  He eventually beat Bob Evans from Cleveland in the Over 50’s final.

In the 2013 tournament a Consolation event was introduced. The two losing players from the group stage of the Open competition played in the Consultation event. After a closely fought event John Mackey from Lincolnshire was the eventual 3-0 winner beating Graham Rollinson from Lancashire.

The 2013 Open competition was won by the 2012 champion, Dave Griffiths from Lancashire, who obtained revenge by beating Mike White 3-0.

Players and guests at the tournament were pleased to welcome Tony Chatwin, President of the AETTU.  Tony presented trophies to the successful players.

Many thanks must also go to the friends and partners of the players who supported the competition and Joyce and Margaret who provided the refreshments during the competition.  Thanks also to Draycott and Long Eaton TTC and Brian Savage for arranging a very good venue for the competition.