Advert star Kathryn switches back to her TT skills

When comparison site U-Switch needed an actress who was also a proficient table tennis player to star in their latest advert, former England youth player Kathryn Delaney was just the person. 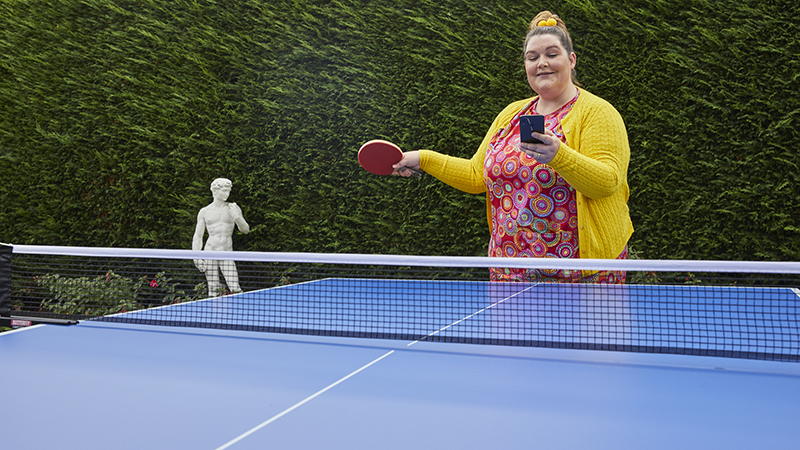 When comparison site U-Switch needed an actress who was also a proficient table tennis player to star in their latest advert, former England youth player Kathryn Delaney was just the person.

Kathryn was a top-10 Cadet just after the turn of the century, enjoying success in competitions primarily in the north west, where she was a member at Halton TTC in Widnes. The table tennis community may remember her as Kathryn Hatton – her dad Chris still coaches at the club.

She left table tennis behind to move into acting and works primarily in theatre, as well as teaching drama.

But she shows the old skills are still in place as she plays the role of a ‘ping pong mum’ in the latest U-Switch TV advert, which will be seen by millions across all major channels, including ITV, C4 and Sky, between now and November 8.

She is seen smashing a winner past her opponent, an eight-year-old girl, during a back-garden match – while simultaneously checking the U-Switch website on her phone.

Very excited to share our new TV ad. Switch energy in as little as one click with Uswitch! 📺🖱️ https://t.co/zExIYougma pic.twitter.com/frIfRIfF14

Kathryn was contacted for the job by her agent and had to send a self-shot video to producers, showing her playing while also on the phone.

A week after that, she was given the job and travelled to Orpington for filming in a residential street.

She was joined by Table Tennis England member and local league player Elyot Burnett, who acted as a feeder to enable Kathryn to play the shot – something she had insisted on in advance.

“They were going to get the girl to feed it, but I said I would need a good player to do that so the ball was exactly where I needed it,” said Kathryn.

“I was so grateful that I had another table tennis player there – he gets none of the kudos of being in the ad but I wouldn’t have done it without his amazing controlling to me.

“The biggest problem was it was a really windy day and it was blowing everywhere and me and Elyot were quite stressed because I had such a small area to play into because of where the cameras were placed.

“We didn’t get the shot in the morning but we got it in the afternoon. We didn’t just have to please the director, but also the ad agency and U-Switch themselves – and they asked us to get a longer piece of footage of me looking at the phone while playing the smash.

“We got that on the first take but then we had this tense moment while we had to wait for the agency and U-Switch to confirm it. I was really happy when they did.

“Then they took me to a Scout hut that they had converted into a photo studio to do the photos for posters and billboards – it was me batting the ball while looking at a phone again.

“It was a really long day because we started at 7.30am and we wrapped after 6.30pm. But the crew were so good with all the covid regulations and the little girl, April, was really sweet.

“It’s one of the most fun things I’ve done – and a lot of people from my past have been messaging me about it.

“The advert is fun and a little bit silly and I want everyone to know I actually did it – there’s no trickery!”